GS&P Gets Smart With Farts Through "Fart Code" App

App seeks to promote healthy eating & the science behind it 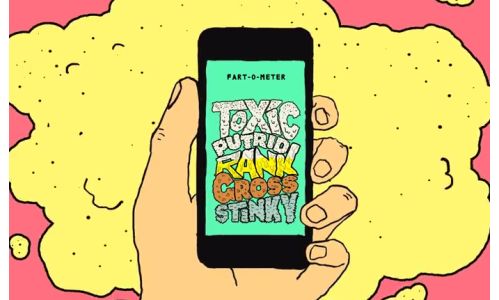 Advertising agency Goodby Silverstein & Partners has created an app called “Fart Code” and is releasing it on the iTunes store today. No, they have not lost their minds.

The agency’s in-house developers, the GS&P BETA Group, made the app to promote kid’s health and science education. And there’s some smart science behind the gross-out laughs.

Once downloaded, the Fart Code app allows you to scan a bar code on any item in the grocery store. The app determines the actual ingredients in that item, noting any ingredients that are known to cause gas.

An algorithm uses those ingredients to determine the level of toxicity on a “fartometer” and produces the appropriate fart noise and vibration; a rough equivalent of how your digestive system would process the ingredients.

Once created, you can share the fart via text message (complete with fart emoji) and social posts. Friends can then click on a link and hear the fart their friend just, um, passed.

“It’s a fun and engaging way to get kids to think about what they are putting in their bodies,” said Margaret Johnson, executive creative director and partner at GS&P.

Schools across San Francisco have signed on to use the app in their class curricula; national teacher resources are recommending the app to their networks; and parents across America are sure to appreciate that their now kids have something to keep them occupied in the grocery store.

A BuzzFeed article, “Get Smart from Your Fart: 14 Common Food Ingredients that Make You Gassy,” outlines some of the ingredients used by the app’s algorithm.