Grolsch Celebrates 400 Years of Originality with 400 Works of Art 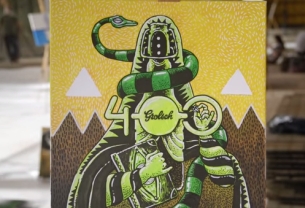 The theme of the global anniversary campaign arises from Grolsch’s brand essence of originality, which is being celebrated by talented artists from around the world. 400 artists have interpreted the beer’s iconic swing-top bottle, and their designs will feature on a series of limited edition packs. The full range of artwork will be revealed online during the celebration of Grolsch’s official birthday on 11 May 2015.

In the UK artists Greg Barth, Nicos Livesey and Tom Bunker, Cathering Losing, Noah Harris and Kyle Bean have created their own unique interpretations of the Grolsch swing-top bottle. The one-of-a-kind designs will be used across the multi-layered campaign which will include targeted OOH, digital advertising and social media.

Bringing the ‘400 Years of Originality’ campaign to life, is an experiential tour. Launching on 10th March in London, the event gives consumers the chance to sample the beer, and take part in a truly unique experience to create their own original portrait using unique visual effects. portrait can be shared on social media as well as printed out on the day. Consumers will then be given a voucher to redeem on their next purchase of Grolsch. The original portraits experiential tour will visit eight cities across the UK including London, Birmingham, and Manchester.  In London, at Waterloo station, hundreds of consumers portraits will be projected on to a billboard, coming together to form one giant and original Grolsch swing-top bottle in full view of thousands of commuters.

Amplifying the ‘400 Years of Originality’ campaign is a unique street art installation on 9th March in Shoreditch, made using  Grolsch’s iconic swing-top bottles and a multitude of street art disciplines.

Ali Pickering, Portfolio Brand Director at Molson Coors, says: “We are hugely excited to launch this activity for our 400th anniversary. Grolsch was founded on innovation and originality; shown in its iconic swing top bottle, and its distinctive bold, but perfectly balanced taste. Therefore we wanted to mark the anniversary by honouring the original spirit which has been key to our success. This campaign champions the individuals who just like Grolsch are trying innovative ways to create original products.”