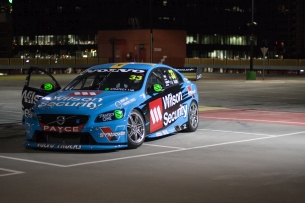 Volvo Polestar Racing and their new major sponsor Wilson Security, have kick started the 2015 Supercars Championship season with a unique and compelling launch.

Volvo Car Australia and Grey Sydney collaborated on producing a non-traditional campaign to reveal the much-anticipated livery of the V8 Supercar’s new sponsor.

“It’s not every day you get the chance to launch the livery of a V8 Supercar. We are extremely proud to be part of this campaign and create content that is relevant for our audience. What’s more we produced a film which is going to resonate beyond the V8 fans,” said Chad Mackenzie, Creative Director of Grey Sydney.

Nowadays brands are leading campaigns through social and online, so a content film released online was the logical move for Volvo to do things differently to get cut through.

“We have been working collaboratively with Grey to build an engaging slice of content, to build awareness but moreover to generate all important relevant leads for our business,” said Oliver Peagam, Marketing and Communications Director of Volvo Car Australia.

The campaign, called The Patrol, involved Volvo Polestar Racing driver Scott McLaughlin, who was given the opportunity to go on night patrol with Wilson Security – turns out it wasn’t your regular night shift.

McLaughlin’s stint as a security guard and the mischief he got up to in an empty car park with his V8 Supercar was filmed and documented by Grey Sydney. The video will launch today, just before the start of the V8 Supercar test season at 1400hrs (GMT+11).

Once the audience have viewed the film they also have the opportunity to win tickets to the Ultimate Bathurst 1000 experience, which includes entry to the Volvo Polestar Racing luxury suite, grid tour, passenger rides with the drivers and more at Australia’s most famous race.