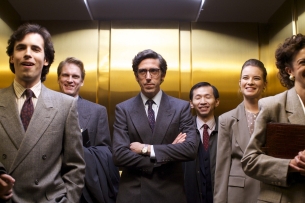 Running a business is about more than just the numbers — it’s about people and human ambition. To encapsulate this, Grey London has created a film depicting one man’s journey, from the launch of his company in 1974 up until the present day, and tells the story of everything he’s experienced in between: the up-and-down, four-decade journey of a business, from start-up to multinational corporation.

The twist? It’s set entirely in a lift.

“The film is really a metaphor for the journey of a business and the people that run it. It takes us through time, and you get to see and feel events in the lifecycle of a business. Yes, it’s a lift journey but it’s the most extraordinary lift journey in the world”, says Nick Rowland, Creative Director at Grey London.

As the lift – and the business – progresses upwards, a multitude of storylines play out within nine square feet: shaking hands on that first deal, watching the number of employees swell and an office romance blossom, office politics and arguments, the bad times – and the anger and frustration they can bring, the crucial deal with foreign investors…

Given the intimate and up-close nature of the location, the shoot was a considerable undertaking in attention to detail – from wardrobe, makeup and hairstyling to prosthetics and props. Not only did the actor have to look 40 years older by the end of the film, everything in the lift had to represent the style of the era being portrayed.  The end result is as much a mesmerising portrait of four decades as it is the life of a business. It was directed by Gary Freedman of The Glue Society through Independent films.

Gary Freedman of The Glue Society says: “This is about the journey of a business but at its core, it is a human story and very much centred around a main character, covering all the emotional ups and downs of his life.  Telling such an expansive story within the confines of a lift was a very interesting challenge, but that restriction allowed us to really develop creative, often unexpected, ideas.”

“It’s a simple idea and it allows a really good story to be told”, adds Rowland.

The film, which will air globally (including in the UK and Hong Kong) on TV and inflight media, is part of HSBC’s It’s Never Just Business campaign, which launched last year with press, outdoor, digital and airport executions.