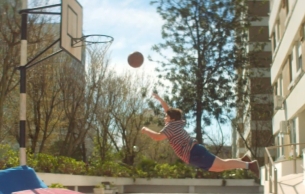 Grey London has unveiled Let’s Go! – its first work for Vodafone UK since the business was consolidated into the agency in February 2015. The integrated campaign, which breaks on 10 April, raises awareness of Vodafone’s 4G offering and introduces an energetic new tone of voice for the brand.

Comprising TV, cinema, radio, print, OOH/DOOH, digital, social and retail, the campaign is an unapologetic celebration of the ones who get out there and live life more boldly.

Ending with the line Live life like you stole it. Live life on 4G, the 60’ TV spot was directed by We Are From LA, the French directing duo behind Pharrell’s Happy video and the ground-breaking 24 hours of Happy. It’s narrated by a punchy, spoken word manifesto over music tracks from Snoop Dogg and DMX.

The campaign – an exuberant celebration of life, mobility and possibility, all empowered by Vodafone 4G – establishes a tone of voice and consistent creative idea that will be used in all campaigns moving forward. It features a cast of more than 40 characters who will continue to feature in future campaigns.

Vicki Maguire, deputy ECD at Grey London, says: “Let’s Go! is about doing more of the stuff you love – for when it comes down to it, what more is a mobile network than something that facilitates that? We wanted to inject some real-world gusto into the brand; to portray something upbeat, genuine and full of life in an industry that has been guilty in the past of being quite fluffy.”

Daryl Fielding, Brand Director at Vodafone UK, adds: “People are living increasingly busy lives and are now more dependent than ever on their mobiles to keep them connected. 4G has opened up newer, faster, better ways for people to do the things they love, and we wanted to champion that freedom – the freedom people feel to do more, share more and enjoy life more. This approach – of shamelessly celebrating life’s doers – is a great creative platform for Vodafone to build on going forward.”

Grey London was appointed to the Vodafone UK roster in March 2014 before being named lead creative agency (following a closed pitch against RKCR/Y&R) in February 2015. The agency also works with Vodafone Ireland (since 2011) and Vodafone Global (since 2013).

Director: We Are From LA