Grey London & Volvo Are Saving Cyclists with This Amazing 'LifePaint' 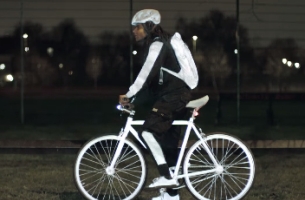 Volvo has always taken safety seriously. They invented the three-point seat belt in 1959 and then opened up the patent so that any car manufacturer could use it. Now they’re giving away a product to take Volvo safety beyond its cars.

LifePaint is a unique reflective safety spray aimed at increasing the visibility and safety of cyclists, and other vulnerable road users. Invisible by daylight, it glows brightly in the glare of car headlights, making the invisible, visible at night.

Though designed for safer cycling, LifePaint can be applied to any fabric — clothes, shoes, pushchairs, children’s backpacks — even dog leads and collars. It is transparent, washes off and will not affect the colour or surface of your chosen material, lasting for approximately one week after application.

Available from today, LifePaint will be trialed in six London and Kent-based cycle shops, including Peloton in Spitalfields, where cyclists can get one of 2000 cans being given away. This is the first phase. If LifePaint proves popular, the project will expand nationally and internationally.

The LifePaint concept was developed by creative agency Grey London, in collaboration with Swedish startup Albedo100 and is one of a series of projects to highlight the key product innovations of the all-new Volvo XC90.

“Our job isn't just to advertise our clients,” said Nils Leonard, chairman and CCO of Grey London, “it’s to help them make a positive impact on culture. With the creation of LifePaint, we've turned Volvo safety inside out, giving it away to the most vulnerable road users. What more positive action can a brand take than to try to save lives?”

Finish Colourist Julien Biard commented on the campaign's film: "It was great to be a part of this brilliant new campaign for Volvo. We wanted to make sure the grade really captured the amazing real-life effect the paint has on materials and I think the end result speaks for itself. It's a fantastic commercial."

Grand Central's Munzie Thind created the sound design for the spot: "It was a really exciting campaign to work on and, personally, I think the reflective spray paint idea is genius.

I worked with a piece of music by Adam Halogen and remixed it so that it worked with what we see on screen. I also brought in new pieces of audio and even got out one of the spray cans in the studio, to ensure the sound  was just right.

It was brilliant to be involved in such a cool project and a pleasure to work with everyone involved. Let’s hope that this product gains traction and helps keeps cyclists safe."