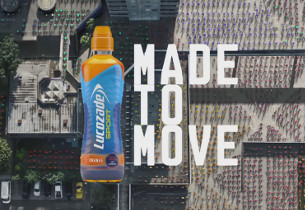 Creative agency Grey London tonight launches its major new brand repositioning for the UK’s leading sports drink brand1, Lucozade Sport. Made to Move will position the British brand as a champion of movement, encouraging the nation to get up and move more.

The brand has set their sights on getting one million people moving more by 2020. The campaign kicks off tonight with the Orchestra of Movement TV spot, which shows an epic staging of all type of exercise and movement set against the backdrop of one of London’s biggest estates. It breaks tonight during a special episode of the panel show ‘The Last Leg’, broadcasting live from the Paralympics on Channel 4, at 20.10.

Dominic Goldman, Executive Creative Director at Grey London, says: “I believe we should try to entertain or be in some way useful to consumers. This spot for Lucozade Sport is intended to do the former while launching the new brand positioning 'Made to Move'. It also encourages people to get off the sofa and exercise, through a giant workout class staged on one of the largest Estates in London. An inclusive, populist and very British take on a sports ad."

Further activity will include the world’s first bus stop fitness sessions.  Created by Grey, Mediacom and DOOH, the bus stop will encourage the unsuspecting public to use their time standing at a bus stop for movement.  A two-way live digital screen will feature a trainer who will lead them in everything from Zumba to boxercise.

Steven Hind, Head of Marketing at Lucozade Sport adds: “We are absolutely thrilled to launch the new Made to Move campaign. We strongly believe that leading a more active lifestyle is key to a healthier, happier and more fulfilling life. That’s why we are setting ourselves the goal of helping 1 million people to move more by 2020. The work that we’ve created with Grey to launch this idea is a positive, inclusive and modern interpretation of the world of fitness today and we are really excited about the potential for this campaign to inspire a nation to move more and progress.”