Grey London Puts an End to Awkwardness Around Disability 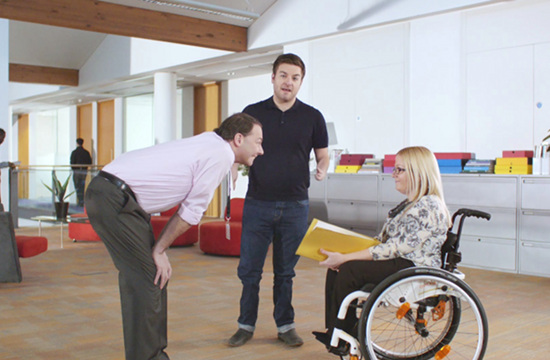 Grey London has unveiled its first campaign for disability charity Scope after being awarded the business in November last year. The campaign, which premieres on national television this Sunday (11 May), bids to ‘End the Awkward’, following research highlighting that the majority of Brits are uncomfortable talking to disabled people.

It revolves around three humorous commercials fronted by comedian and star of Channel 4’s The Last Leg Alex Brooker, who guides viewers through a series of awkward situations that they may encounter with a disabled person, such as the awkward ‘how do I shake a hand that isn’t there’ situation: left handed shake? Chest bump? Or the less common job interview wave?

The other two films look at the awkward ‘is this another crushing rejection or is she deaf?’ situation, and the awkward ‘I’ve bent down to a wheelchair user, now what?’ situation. The campaign also comprises a raft of online content including tips, guides and videos on how to End the Awkward.

The campaign is based on the insight that most people don’t know how to act around disabled people – which usually doesn’t come from deep-seated prejudice but is down, primarily, to ‘innocent ignorance’.

Vicki Maguire, deputy ECD at Grey London, says: “We’re extending the hand of friendship to those who feel awkward around disability. This is not a blame game. There’s often no malice involved – many people just don’t know how to act. We’ve had great success with education through comedy, and our aim here is to remove the stigma that often exists around disability. It’s time to break the ice”

Jeff Low, who directed the commercials, says: “The idea was already really sharp and very recognisable to me.  It made me wonder how I had behaved in similar situations ... so all I did was try to create conditions so that idea could take centre stage and let Alex inject his personality into the pieces. While it sounds counterintuitive, all I did was try to carve out room so the idea was very clear because that’s what is great about the project. ”

According to a new report by Scope, a fear of seeming patronising or saying the wrong thing is why most people feel awkward talking to disabled people. Scope says that the research sheds new light on why disabled people continue to face negative public attitudes in 2014.

It reveals that so-called ‘millennials’ are twice as likely as older people to feel awkward around disabled people – one fifth of 18-35 year olds have actually avoided talking to a disabled person because they weren’t sure how to communicate with them.

Richard Hawkes, CEO, Scope, says: “We’ve all been in situations that have made us cringe. But imagine if every day, people avoided talking to you because they weren’t sure what to say or how to act. That’s the situation that many disabled people face today.

We wanted to raise this issue in a light-hearted way, because it isn’t about pointing fingers. Not enough people know a disabled person, or know enough about disability. This can mean people worry about saying or doing the wrong thing and feel awkward. But it can also have a serious side.

In 2014 disabled people face many challenges. Many disabled people continue to face negative attitudes, in the street, on public transport, at work. We’ve launched this campaign to get us all thinking about what we can do to include disabled people more in our lives.”

Scope’s research shows that there continues to be a real lack of public understanding about disability:

- Nearly half of the British (43%) do not personally know anyone who is disabled.

- Over three quarters (78%) of those surveyed said that they would not be comfortable speaking about disability in front of a disabled person, with many worrying they would say something inappropriate or use an offensive term by mistake.

- Many people said that getting to know someone disabled (35%), or getting advice from disabled people (28%), would make them feel more confident when meeting a disabled person.

Alex Brooker, who has a prostethic leg and hand disabilities, says that he hopes the campaign will get people talking about, rather than avoiding, the issue of disability: "Some people can feel a bit awkward about disability but more often than not it's coming from a good place because it's just someone not wanting to offend. I don't see anything wrong with being curious, I would be if I saw someone different and I'm disabled myself.

It's just about getting past that and feeling confident because a disability is only a part of who someone is I think."

The campaign was created by Lex Down and Jamie Starbuck and creatively directed by Vicki Maguire. It was directed by Jeff Low through Biscuit.