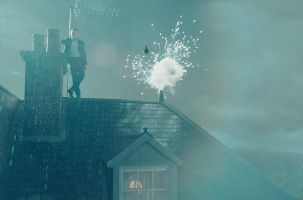 Grey London’s new campaign for insurance brand NFU Mutual revolves around what may appear at face value a surprising claim: that the insurer ‘loves to pay out’. While bold, it’s also true: NFU Mutual, which has been voted Which? insurance provider of the year 2016, pays out on a staggering 98% of home insurance claims (based on annual settled claims 2013-2015, excluding claims not pursued by the claimant).

Taking inspiration from that surprising statistic, the campaign also breaks from industry norms – revolving around an energetic TV spot with a jaunty track and shot by acclaimed music video, commercial and film director Jake Scott through RSA Films.

Jake – son of Ridley Scott – has worked with some of the world’s biggest brands, including Adidas, Apple, Coca-Cola, Nike and Mastercard. Notably, he has directed Budweiser’s acclaimed Super Bowl half time spots every year since 2012, while most recently, his ‘The Hoop’ spot for Dicks Sporting Goods was named by USA Today as its ad of the year, while the eight-minute ‘Gentleman’s Wager’ starring Jude Law for Johnnie Walker was awarded a D&AD pencil for creative excellence.

In this new TVC, a NFU Mutual agent struts up a tree trunk that has fallen in a storm and damaged a house, tap dances a wonky roofing slab back into place and effortlessly fixes a chimney that has been damaged by a lightening strike, before sliding down a slippery roof and coming to the aid of a couple whose kitchen has been flooded, reassuring them that ‘of course’ the company will pay out on their claim.

As well as the TVC, the campaign comprises cinema spots, a raft of digital content and in-branch activity

Gina Fusco, Director of Strategy and Marketing at NFU Mutual, says: “At NFU Mutual, we love to pay out. Our local agents understand the importance of acting first in a crisis, and can then be relied upon to sort out the details later. That’s why we pay out on 98% of home insurance claims – with no quibble and a local service. We’re really excited to support this with a campaign that is so tonally different to anything else in the industry.”

Sam Haynes and John Gibson, Senior Creatives, Grey London adds: “The world of insurance advertising can be very doom and gloom. We wanted something a bit more positive, a bit more upbeat – because NFU Mutual love helping people, and that should be celebrated.”