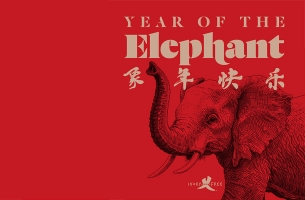 February 8th marks the beginning of the Chinese New Year, with millions of people around the world coming together to celebrate the Chinese Year of the Monkey. But this year, with momentum building to finally stop the illegal ivory trade and end the years-long poaching war on elephants, Grey London and conservation group WildAid are calling on the world to help make 2016 the first ever Year of the Elephant.

An estimated 33,000 African elephants are killed every year for their tusks. But, with international criticism mounting, world leaders have finally charted a course to ending the crisis. In the past six months, both the United States and China – the world’s largest ivory market – have agreed to phase out commercial ivory sales, while Hong Kong – whose government has previously been a fierce supporter of its large domestic ivory trade – has vowed to ban the local ivory market.

In order to grasp this historic opportunity, WildAid is calling on anyone who cares about elephants to #JoinTheHerd by wishing their social media friends and followers a ‘Happy Year of the Elephant’. That’s “Xiàng Nián Kuài Lè” (See-ANG nyan qua-ler) in Mandarin. Supporters are also encouraged to change their social media profile photo through the generator at YearoftheElephant.org.

This week’s social media blitz is the first in a year-long series of international campaign activities for Year of the Elephant, including celebrity events, rallies and design and photography competitions to celebrate elephants and ensure that the world’s illicit ivory trade is shut down – once and for all.

WildAid CEO Peter Knights says: “Finally there is a glimmer of hope for the world’s elephants, with the United States, China and Hong Kong committing to end the ivory trade. But there is much work to be done. Year of the Elephant is a trumpet call to action: we are here to ensure that promises are kept and elephants are saved.”

Year of the Elephant was devised by WildAid and Grey London, in partnership with Grey China, Ogilvy PR, Teein and Lovesocial in New York. It calls upon the worldwide closure of ivory markets and is asking the US, China and Hong Kong to provide specific details and a detailed timeline for the phasing out of ivory sales.