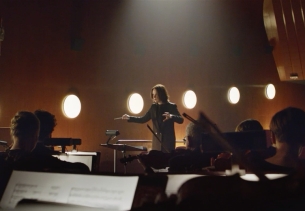 Volvo Car UK and Grey London have teamed up with one of Sweden’s most respected music conductors to promote the V40 R-Design.

In a filmic portrait, which will air on UK TV from January, Marie Rosenmir ponders her preoccupation with detail and its importance to the overall narrative, her sentiments echoing the design philosophy of the V40.

Shot by British photographic / filmmaking collective Leila and Damien de Blinkk, it draws parallels with the fine craftsmanship of the V40 and the fine details of a symphony orchestra. In the build up to an opening night performance, the film shows Marie’s final preparations and meticulous consideration to the minute of the performance. Intercut with these observational shots are extreme close up shots of the V40’s numerous design details, such as the stitching on the leather upholstery, the illuminated gear shift, 17" Ixion Alloy Wheels and auto-folding power door mirrors.

Andy Lockley, creative director, Grey London said: “It’s the combination of many different factors – some of which you are conscious of, but many of which you aren’t – which make driving a car unique or pleasurable. The V40 boasts lots of lovely, intricate design details, which in isolation may not seem particularly significant but when combined create an incredibly satisfying overall experience. We likened this to a really moving piece of music performed by an orchestra – each small component playing an important part in the overall piece. In this respect, the role of a conductor and of an automotive designer aren’t that different”

Georgina Williams, Head of Marketing, Volvo Car UK, adds: “The ‘Life Is In The Details’ campaign continues to leverage our Swedish provenance and design philosophy which is proving so successful for our business and brand here in the UK. In the TV execution this is delivered via the musings of Marie Rosenmir’s craft. Set against the Swedish landscape and crafted design features of the V40, the complete piece aims to establish the V40 R-Design as a car for the discerning eye.”

The film was shot on location in and around Gothenburg, the home of Volvo. While featuring the idiosyncratic Swedish landscape synonymous with the car brand, this story is set in a notably less rural environment to appeal to the V40’s more urban audience. It was entirely unscripted, with Grey and Volvo simply agreeing a creative intention, allowing De Blinkk the chance to shoot organically to capture an authentic, filmic language.

The film features a bespoke music score written by award winning composer Tom Player, known for his work on The Hobbit and Game of Thrones. It is the second piece of work from Grey London for Volvo to hero a female driver in a traditionally male dominated category, following 2014’s The Swell for the XC60, which featured a female night surfer.