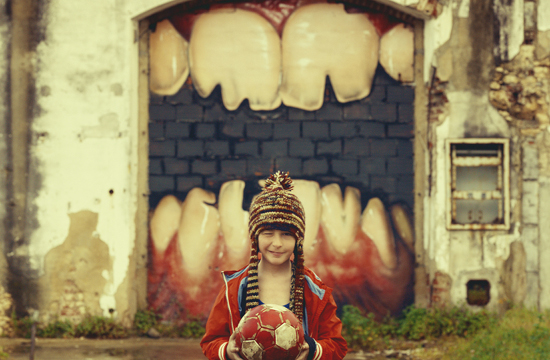 The TV for both campaigns forms part of integrated launches including OOH, press, digital, radio, retail, social, below the line and PR.

Led by Grey London, Vodafone Ireland has adopted a new approach to their advertising in order to bring the benefit of Vodafone’s products and services to life. Vodafone’s RED and Network campaigns focus on celebrating the ‘good things’ in life with endless calls and texts on Ireland’s leading network. Both ads form part of Vodafone’s global ‘A Good Thing’ strategy recently launched by Grey London with ‘The Kiss’.

The insight that inspired the Vodafone RED ‘Ball’ ad is that consumers want to be able to connect with the ones that matter to them for as long as they want. Directed by Kevin Thomas, the ad follows a boy who is inseparable from his one big love – his football. Taking it everywhere, even places he most definitely shouldn’t, the ad plays on the idea that good things should never come to an end, dramatising the consumer benefit of endless calls and texts. The Shazam-enabled ad allows people to download the classic track ‘Give Him a Ball and a Yard of Grass’ from the 80s Irish band The Sultans of Ping FC.

Meanwhile the Network ad is led by the insight that consumers want to be always connected so that they can make and receive calls whenever and wherever they want. Vodafone’s network programme is ensuring that coverage is getting even better across Ireland, which is definitely a good thing.

‘The Wait’, directed by Sara Dunlop, looks through the lens of a group of girls in a café where one of them is waiting for that all-important phone call from a guy she’s given her number to, a situation that many people can relate to. We see real tension build up as the girl waits eagerly but despite full coverage, she never gets that call. The ad finishes with the line ‘if you don’t get that call, it’s probably not our network’, dramatising the benefit of Vodafone always improving their network. ‘The Wait’ continues the strong music theme from ‘Ball’, with the classic love song ‘Wishin’ and Hopin’’ by Dionne Warwick.

Anne Mulcahy, Head of Brand at Vodafone Ireland, says: “Our Vodafone RED and Network campaigns are game-changers for us. RED is a complete package for consumers covering unlimited plans, a fantastic range of phones, expert support and safe and secure products - brought to you on Ireland’s leading network. We love the ads that Grey London have produced; both are great creative ideas, with great emotion and credibility, and the music for both are key talking points in the Irish market.”

TV credits for The Wait