The shop is taking part in ‘national fajita day’ on Friday, a concept realised by Made Up Ltd in hopes to have friends and family sitting together for dinner 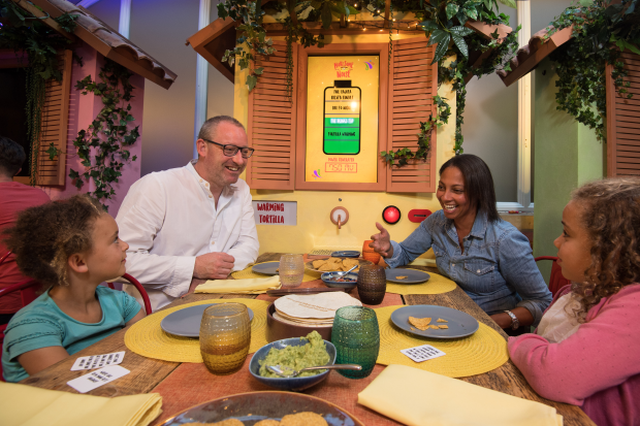 Mexican food brand, Old El Paso tomorrow opens a pop up restaurant in which the diners’ conversation, chat and laughter will be used to power certain elements – including the warming of the tortillas!

Thought to be the first restaurant in the UK ever to be partly powered by conversation, it uses piezoelectric technology as a basis for the generation of electricity by way of specialist microphones positioned around each individual table. The more conversation the table engages in, the more electrical volts they produce, which once channelled through collectors will create small amounts of usable electricity.

Virtual batteries at each table will store the power each table is producing. And as the battery fills up and reaches certain voltage levels, it will unlock elements and rewards for the table.

• Once 250mv are reached, your tortilla will begin to warm

• At 500mv, a margarita tap will switch on so diners’ can pour themselves a glass

• At 750mv, the lighting around the table with dim to create a cosy evening atmosphere

• And at the final level of 1250 mv, a confetti cannon is triggered

The whole restaurant has been designed and created to fuel conversation on what Old El Paso is naming National Fajita Friday - a day they want to encourage the nation to sit and eat with their friends and family because a recent poll of 2,500 UK families they conducted found that one in ten families admit that they never sit and share dinner together.

If conversation runs out then the battery will stop charging. But help is on hand. To keep conversation fuelled, there will be a push button at each table which will dispense a card with a conversation starter on it. Even the tortillas will have a question laser etched onto them!

Lionel Morgado from Old El Paso says: “We are on a mission to get people talking on National Fajita Friday. When the family sits together over Mexican it creates happy noise and genuine connections. It is a cuisine that naturally brings people together. Everyone has to roll up their sleeves, dive in with their hands and pass the guac around. It fills your heart as well as your belly!,” he says.

The poll also revealed that multi-plate meals such as Mexican, increase levels of conversation and heightens ‘happy’ noise as there is often a physicality to these meals which does not occur when everyone eats solely from their own plate.

“We wanted to create a fun space where friends and family are encouraged, and rewarded for really connecting in a meaningful way with one another over a delicious meal,” concludes Morgado.

So get talking else you might not get your food!

There will be prizes for the table which generates the most amount of electricity during the evening.

Open to the public for one night on a first come, first serve basis, the restaurant will serve a starter of loaded nachos, a choice of meat and vegetarian fajitas for main, followed by a dessert, all accompanied by a limited number of alcoholic and soft drinks for free.

Tables for 6 will be available. Evening starts at 7pm (limited seating available).