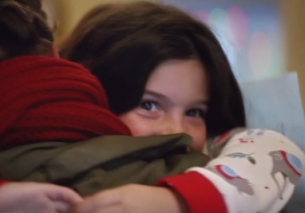 Christmas is a time for families to come together; no more so than in Ireland where the modern Christmas spirit centres around presence rather than presents. Being there is what really counts. Vodafone Ireland’s Christmas offering, from creative agency Grey London, plays on this in a heart-warming TV spot which demonstrates the importance of family at Christmas, but also the value of an old-fashioned surprise.

In it, we see a seven year old girl Aoife getting ready for Christmas – writing to Santa in front of an open fire, helping her dad decorate the tree, shopping with her mum. And yet, after rushing downstairs on Christmas morning, she seems downcast, distracted. It’s clear the present she’d been wishing for hasn’t arrived. That is, until she hears a car pull up on the drive and the front door open. She runs through into the porch and straight into the arms of her big brother, who’s come home for Christmas. He’s clutching her letter to Santa, which he tells her Santa gave to him.

The ad closes by reminding us that sometimes the best call of all is made in person, and urges us to get closer this Christmas. It breaks on TV on 16 November and is supported by an out-of-home campaign based on the same story and a significant digital campaign created by Target McConnells.