Grey London Blows Away Competition in Post-it Spot for 3M 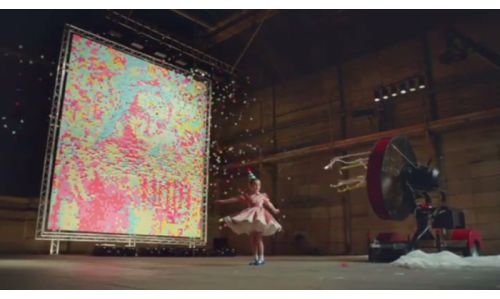 Grey London has been appointed by 3M, the diversified technology company, to handle the €10m advertising account for its iconic Post-it brand in the UK and across Western Europe.

With a brief to reclaim the category it created from cheaper copycat competitors and launch its stickiest product ever, the campaign for Post-it Super Sticky Notes launches a new ‘Make it Happen’ pan-European platform for Post-it Notes and spans TV, print, digital and activation.

A high-powered industrial fan, six feet in diameter and generating wind speeds of 30MPH points at a 22ft wall covered in over 7000 Post-it Super Sticky Notes and cheaper notes. The fan literally blows away the competition, gradually revealing an epic mosaic image, made out of the only notes left on the wall: the Post-it Super Sticky Notes.  One shot. No rehearsals. If the product hadn’t lived up to its name, there would be no ad.

The revealed image of a little girl, also the protagonist of the film, on her special day reminds us of the moments in our lives that are too important to let slip. Proving not only that Post-it Super Sticky Notes are stickier, but why they’re stickier.

The TVC is supported by digital activity through Jaywing, which includes a six month online competition where consumers upload an image of their dream on a Post-it Super Sticky Note to get a chance to win £1500 each month to “Make it Happen”. Media planning/buying is through Mediacom. Escapade is handling the PR campaign, which includes a partnership with Jessica Chivers, the “Thinking Woman’s Coach”.

Chris Hirst, CEO, Grey London said: “The Post-it Brand is one of those rare brands which not only established an entire category but whose name has come to denote it. Aside from our obvious pride of working with a company with such rich heritage, this relationship has real creative potential – 3M really bought in to our way of thinking and our concept of ‘long’ ideas.”