Grey Examines the Art of Satire for the Unquiet Film Series 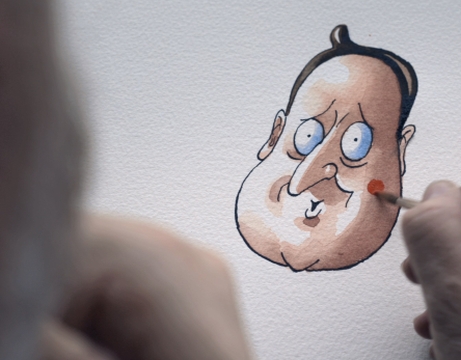 The Art of Satire – the latest instalment in The Unquiet Film Series, a collection of films that launched in June of this year chronicling the untold stories of The Times and The Sunday Times – has been launched online today, following its premiere and exclusive two-week run at the Cheltenham Literature Festival. The latest in the short film series, The Art of Satire documents the work of multi-award winning political cartoonist Peter Brookes.

The films are the result of a selection of independent film-makers given access to the newspapers’ staff and 229 years of archive material. In the latest addition, The Times’ political cartoonist Brookes – who has been with the paper for over 20 years – gives an insight into the world of satirical news and artwork, working to a daily deadline and the importance of not being tied to any one party as “cartoonists are the permanent opposition”.

Commentary from broadcaster Jon Snow, The Guardian’s Martin Rowson, plus colleague and fellow cartoonist Morten Morland amongst others reveals Brookes as an integral part of the political conversation managing to tell a story and cause an “assassination without the blood” five days a week.

From director Liz Unna: “Peter Brookes has an exceptionally rare talent.  Every day he filters all the stories, all the commotion from the world, into one beautifully drawn, single-cell image.  An image that has something incisive to add to the political conversation, an image that makes us laugh and look at our leaders in a new light.  This film explores the mind and the process behind his incredible artwork, and in so doing reveals the importance of the role of satire in Britain today.”