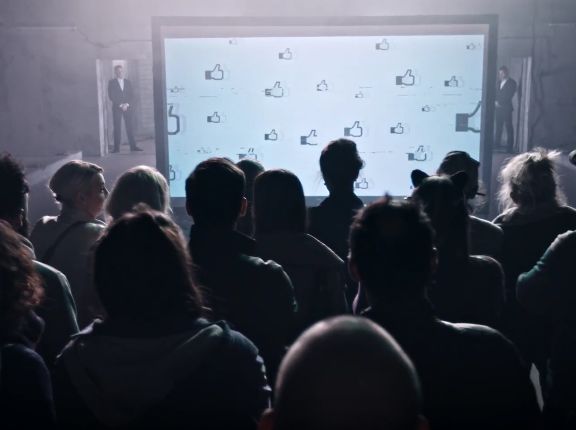 Brexit and the US presidential election have shown how voters can be massively influenced, especially via Facebook. In the era of fake news accusations against the media environment, Orange by Handelsblatt, the youth magazine of the well known German business newspaper, is now setting an example. With the German federal elections approaching, and with them the growing risk of political manipulation through social media networks, GREY has developed a browser plugin for Orange by Handelsblatt, which prevents such a manipulation and pops the digital filter bubble: The Data Corrupter.

On Facebook, algorithms continually adjust what is shown on people’s timelines, based on their previous behaviour. This leads to a self-perpetuating cycle where people’s views are artificially limited and reinforced. It results in a self-generated filter bubble, which keeps out news that is not aligned to a person’s views. Based on these behaviour patterns, data analysts can also create psychometric profiles, which are used to micro target users with messages that are aligned to the user’s expectations, therefore making them more receptive to the messaging.

Data companies have already confirmed that this type of profiling and targeting was used to influence and manipulate voters in the US elections and during the UK Brexit referendum. The concern of Orange by The Handelsblatt Group is that the same may now also happen during the German elections. This is precisely what the Data Corrupter has been designed to prevent. Every time Facebook users like a post, the Corrupter automatically adds a number of randomly selected Likes, thereby blurring the user’s profile. These added likes are not visible to the users themselves, or their social media networks, but their profiles have become useless to data analysts.

“Micro targeting is not a new issue. But when it is enhanced with psychometric systems and used to generate manipulative political messages, a line has been crossed,” says Frank Dopheide, General Manager from The Handelsblatt Group and responsible for Orange by Handelsblatt.

Ranked #1 in the “GPRA Trust Index 2016”, the issue of independence, trustworthiness and objective reporting is of highest importance to The Handelsblatt Group. After all, the trust of consumers can only be earned if stories have been meticulously researched and reporting is as objective as possible. To apply these principles in the digital world, Orange by Handelsblatt is now setting an example with the Data Corrupter.

“With this campaign we not only intend to draw people’s attention to two central problems – the existence of the filter bubble and the deliberate manipulation for political purposes – but at the same time are offering a real solution. We are aware that we simply can not compete with the programmers from Google, Facebook and co. Which is why the entire project will later be transformed into an Open Source issue. You could say it is the first stone cast into the water, which generates a ripple effect,” says Fabian Kirner, CCO at GREY.