Grey Conjures the Spirit of Hitchcock for Watches of Switzerland 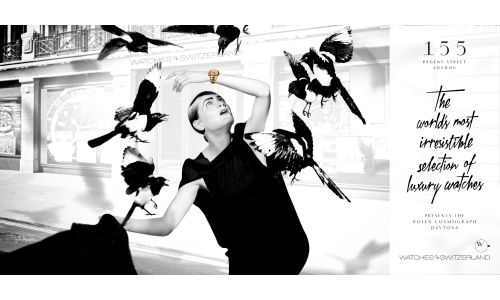 Grey’s eye-catching creative takes visual inspiration from Alfred Hitchcock’s The Birds and sees a sinister swarm of magpies descending on London – attracted by the store which, like they, covets beautiful, premium shiny things. The ads read The world’s most irresistible selection of luxury watches.

The three-story emporium opens on 30 June and will become Europe’s largest standalone watch showroom and represent the “next phase of luxury watch retailing” according to Aurum Holdings (the UK’s largest prestige and luxury jewellers and Watches of Switzerland’s parent company) CEO Brian Duffy.

The campaign was shot by up-and-coming photographer Erik Madigan Heck and breaks on 27 June. It also comprises press ads – including national, lifestyle and luxury titles – outdoor sites – including London’s Heathrow airport and stations across the London Underground – and digital executions. Media was bought by ZenithOptimedia.

It will also be supported by in-store activity (including suspended magpies throughout the store and large window displays featuring golden birdcages) plus – in a touch that is sure to make Londoners pause and look up – a murder of magpies perched on the Christmas light wires on Regent Street.

Chris Hirst, CEO, Grey London, says: “Watches of Switzerland is a genuine market leader and – on the eve of launching what will be the standout retail space in its sector – now is a hugely exciting time to be working with them. A milestone event requires a milestone campaign and we think this work, which defies rigid category conventions, will really get people talking.”

Brian Duffy, CEO, Aurum Holdings says: “This is a big moment for Watches of Switzerland.  Our first ad campaign in donkeys years.  Grey have been brilliant.  We love the campaign and were so impressed by the teams creativity and attention to detail”