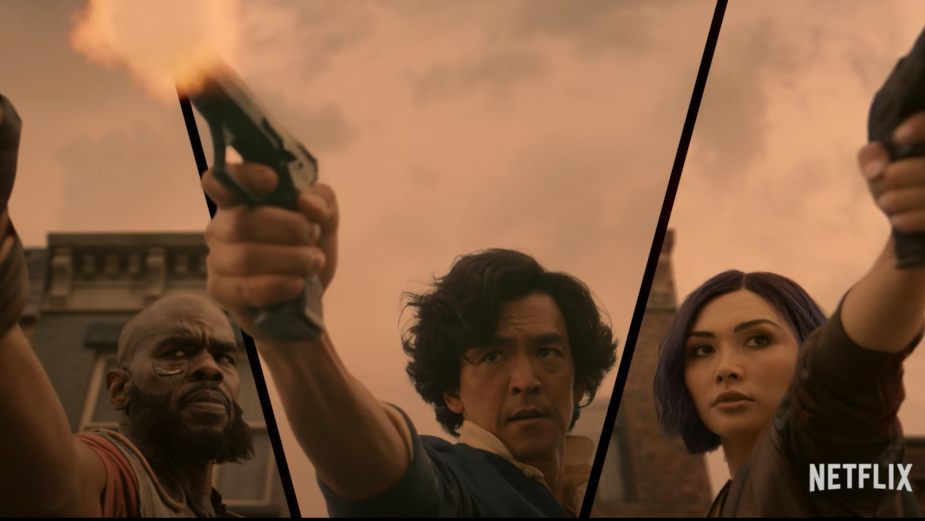 The largest Netflix promo shoot to date with an estimated budget of $1.5MM, the promo was shot in Auckland, New Zealand over three days in March 2021, and was delayed twice due to Covid outbreaks in Auckland. With lightning-fast action sequences augmented with Jardin’s unique interactive split screen technique, he also executed the visual effects himself.

“I wanted to do something that paid tribute to the anime’s iconic opening title sequence,” said Jardin, “so the interactive split screen idea came into play to capture the tone and spirit of the show yet frame it all in a visually arresting wrapper.”

The promo marks Jardin’s 13th collaboration with Netflix on creating marketing assets for the home entertainment giant. His initial work began with a more simplistic toolkit-style marketing shoot for the first season of GLOW. Jardin’s additional work include marketing promos for 13 Reasons Why and the Clio Award-winning Ava DuVernay’s When They See Us.

“With Cowboy Bebop, we needed to create a lot of excitement for the show itself, targeting simultaneously fans of the existing anime series as well as people unfamiliar with the show whatsoever,” added Jardin.

Jardin, who often does his own VFX and post-production, is slated to direct a new Netflix promo in the coming weeks, and also has a feature length film with producer Colman Domingo in development.