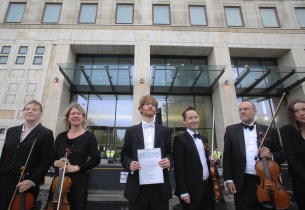 At 9:50am Monday morning, the Chrystal Palace Quartet and supporting musicians performed the opening recital of Greenpeace’s month-long run of Titanic-themed orchestral protests against Arctic drilling outside Shell’s offices on the South Bank.

The performance, entitled ‘Requiem for Arctic ice’ and inspired by the famous story of the quartet continuing to play as the Titanic went down, is intended to rouse Shell’s UK staff to challenge their bosses on Arctic drilling and urge them to change course.

Each Shell employee was offered a gift of a copy of the music and a whistle-blower email address, as they arrived at the office this morning.

Shell’s fleet is currently hovering at its Arctic drill site. Everyday it’s monitoring the melting ice edge, waiting for its moment to start boring holes deep into the seabed, hoping to strike oil. It wants to reach new oil fields under the melting ice and extract more of the stuff that caused the melting in the first place.

This month, Shell has reached the climax of its Arctic drilling venture. It’s got a window of mere weeks to strike oil and billions of dollars on the line.

Mel Evans, Arctic campaigner, said: “This protest is about reaching into the hearts of Shell employees, and asking them to help Shell avert disaster. The titanic was doomed because its design couldn’t outsmart the icy ocean. Shell is also vastly underestimating the risks it faces in the Arctic. If Shell tries to drill in the harsh Arctic environment then oil spills are inevitable. And an oil spill in the remote Arctic would be impossible to clean up, leaving local people and wildlife to suffer the consequences for years.”

“We already have access to more oil than we can use without committing ourselves to catastrophic climate change. Shell cannot be allowed to trash the Arctic looking for more.”

Climate change is melting the Arctic sea ice at an alarming rate, and this March the Arctic experienced the lowest sea ice maximum ever recorded. As the ice recedes, it becomes easier for oil companies to reach further into the Arctic and extract the reserves of oil and gas buried beneath the ocean floor.

In April, the Obama administration approved Shell’s plan to drill for oil in the Chukchi Sea in the Alaskan Arctic. Since then Shell has faced increasing public pressure over its Arctic drilling plans, including a ‘Kayaktivist’ protest movement in Seattle, which has spread into Canada and Europe, and a 40-hour ‘hanging blockade’ from the St John’s Bridge, Portland, stopping Shell’s icebreaker Fennica from leaving port. In recent weeks, celebrities such as Peter Capaldi, John Hurt and Maisie Williams spoke out against Arctic drilling, and Al Gore and Hillary Clinton both spoke out against President Obama’s support for Arctic drilling.

The extreme Arctic conditions, including giant floating ice-bergs and stormy seas, make offshore drilling extremely risky. The US administration acknowledged a 75% chance of a large oil spill over the lifetime of the wells. And scientists say that an oil spill in the Arctic would be impossible to clean up, endangering the Arctic’s unique wildlife.

Earlier this year, researchers concluded Arctic drilling is incompatible with limiting global warming to 2 degrees above pre-industrial levels, a target agreed by most governments. And when urging the oil industry to do more to tackle climate change, the Archbishop of Canterbury expressed particular concerns about the recent push to drill in the Arctic Ocean.

Shell’s past attempt to drill in the Arctic in 2012 was plagued with multiple operational failings culminating in the running aground of its drilling rig, the Kulluk.

This season, Shell has already suffered set-backs, including a huge tear in the hull of one of its support vessels, which carries important safety equipment for its Arctic drilling project. The ship returned to Oregon for repairs a week ago, and the US government ruled Shell cannot drill into hydrocarbons until it arrives at the drill site.

ConocoPhillips, Eni and the Norwegian oil giant Statoil all suspended their Alaskan Arctic drilling plans. Shell has already spent $6 bn, and is expected to spend a further $1 bn this year on Arctic exploration.