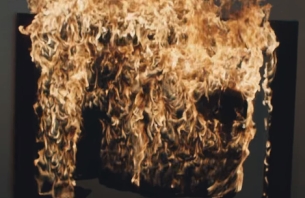 Greenpeace’s Save the Arctic campaign has teamed up with award winning British creative agency Don’t Panic, and famous British montage artists Kennardphillipps, to create its next video targeting oil giant Shell and its plans to drill in the icy waters of the US Alaskan Arctic this summer.

The video shows three iconic landscape artworks burning away to expose jarring dystopian replacements by British montage artists KennardPhillipps. In the new artworks, the scenes have been transformed by Shell drilling infrastructure, devastating oil spills and explosions. It gives the viewer a powerful sense of what Shell risks by drilling in the Arctic.

The famous artworks torched by Shell include ‘Pearblossom Highway’ by David Hockney, ‘Christina’s World’ by Andrew Wyeth and ‘An Arctic Summer: Boring Through the Pack in Melville Bay’ by William Bradford.

Elena Polisano, Arctic campaigner, Greenpeace, said: “Shell could be risking disaster by drilling for oil in Arctic waters in less than six weeks. We made this video to expose that, and show how its plans affect all of us too – because the impact of climate change affects the places we all live in.

“If Shell drills in the Arctic it could devastate this iconic and beautiful place, and its incredible wildlife, like polar bears and narwhals. All the evidence shows Shell can’t drill for oil safely in the Arctic. The extreme conditions mean it’s when, not if, a spill will happen. Shell has a huge PR machine behind it, but it didn’t count on millions of ordinary people standing up to protect the Arctic. We need everyone to watch and share this video, to show Shell it won’t get away with destroying the world we love.”

Artist collective Kennardphillipps, said: “We sorted through hundreds of photos of oil accidents. We have superimposed these real oil spills onto the American dream and the pristine icebergs of the Arctic.