The Sustainability Channel 322 Add to collection 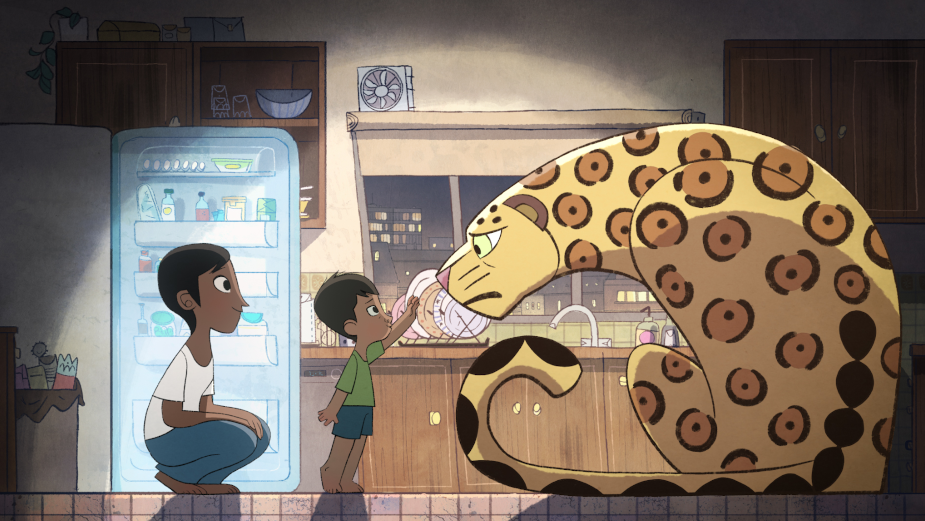 Greenpeace launches a new campaign, created by Mother London, to shed light on the global consequences of industrial meat production. Through an animated film, produced by four time Oscar-nominated Cartoon Saloon - the studio behind WolfWalkers film, the campaign takes aim at deforestation across South America, bringing it to life through the experience of a displaced jaguar called Jag-wah.

In a child-friendly and bite-sized film Jag-wah, displaced from Brazil’s once lush and diverse forests, guides the audience through the horrors of deforestation.

‘There’s a Monster in my Kitchen’ tells the lovable jaguar’s story, forced from his forest home to make way for grazing cattle and animal feed plantations. A young boy sneaks downstairs for a midnight snack, running into a terrifying monster who tells us all why he is no longer in the forest, and instead has come to warn the little boy about the monster meat companies destroying his home.

Narrated by Brazilian actor Wagner Moura (Pablo Escobar in NARCOS) in the style of a nursery rhyme, There’s a Monster in my Kitchen shows us all the brutal consequences of industrial meat production. It aims to stimulate individual actions, like switching to plant-based alternatives, and encourage collective activism - highlighted with a scene featuring Paul McCartney - to help influence companies and governments to save the forests.

Last year’s Amazon fires caught the media’s attention but the 2020 fire season has seen new records set across the board. The film release comes as a new analysis by Greenpeace of the latest fire data from Brazil’s National Institute for Space Research shows an area almost equivalent to the UK has burned across Brazil so far this year.

John Sauven, executive director of Greenpeace UK commented: “Meat is at the heart of much of South America’s habitat destruction. Our relentless desire for meat on ever-increasing industrial scales is having lasting consequences for the health of our planet and ourselves. If we protect nature, nature will help protect us. Everyone can make a difference. But it is the retailers and suppliers of meat who can have the most dramatic impact by cleaning up their supply chains.”

Paul McCartney, Greenpeace supporter who appears in the film said: “The world’s forests are truly irreplaceable. They’re home to Indigenous Peoples, amazing wildlife and are vital in our fight against the climate crisis. But, as Greenpeace's 'Monster' animation so powerfully shows, these forests are being cleared at a shocking rate to farm more industrial meat and dairy. This is why reducing our meat is so important. But that alone isn’t enough. To solve this problem, we need supermarkets and fast food restaurants to clean up their supply chains and make the switch to less destructive, plant-based alternatives. Our forests – and all our futures – depend on it.”

Ana Balarin, partner at Mother added “The impact of industrial meat production in South America is so vast and challenging to visualise that we chose to bring it to life through a human story, which makes the issue more relevant to our audience’s lives and offers them tangible action for positive change.”

Wagner Moura, Golden Globe-nominated actor, who narrates the English and Portugese language films said: “There are few more incredible and precious places on earth than rainforests like the Amazon. Yet many don’t know that the meat and dairy products sat in our refrigerators could be responsible for the fires and chainsaws devastating the Amazon and other important forests. Monster meat companies continue to clear forests at an astonishing rate, all to produce the meat in our kitchens. We need to take action before it’s too late. I’m so pleased to be working on this crucially important film with Greenpeace. This fight has never been more urgent. Together we can stand against the industrial meat companies razing our precious forests. I hope this film inspires many more to join our mission to protect forests.”

Meat is the single biggest driver of deforestation worldwide. The demand for beef and animal feed crops like soya are the key reason for South American forests clearance - 90% of all soya produced is used in animal feed.

This destruction is catastrophic for Indigenous Peoples who often face violence as ranchers and illegal loggers seek to take their land and is hugely harmful to forest wildlife. The world’s largest wetland, the Pantanal, has seen record fires which have put at least 600 jaguars in danger out of an estimated population of 2,000 in the region.

The film will be running in paid social and cinemas across the world, all localised for their audience. For example, in Danish, famous Danish children’s author Marianne Iben Hansen was brought in to translate the script; and the Spanish voice is provided by Jamie Lorente, best known for his role in Money Heist. It is also being shared by Greenpeace’s army of supporters and ambassadors on social media.