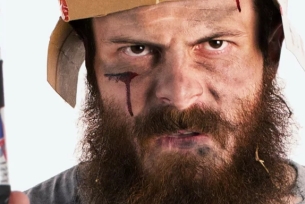 Big fat beards. Love 'em or hate ‘em, they’ve taken fashion by storm. Having become a badge of honor for some and a mark of ridicule for others, director Alexander Engel captures the comedy of both sides in his new short film, Beardtown USA. A beard-owner himself, he pushes all the right buttons, poking fun at its champions as well as taking swipes at its naysayers.

Having both written and directed the piece, Engel plays an overconfident beardsman racing through monologue with a cocky and ridiculous air. Challenging how people take such serious stances on such non-issues, he spits quips, innuendos and quotable one-liners to which no one goes untargeted.

The piece acknowledges how beard-growing has infiltrated the fashion community, spinning tags like lumbersexual and metrojack— Engel even makes point to furnish his set with hipsternalia, such as PBRs, tobacco pipes, plaid button-downs, and his very own fixie.

The film’s humorous and frenetic storytelling engages its audience— packed with detail and moving fast, it’s not only watchable, but re-watchable, encouraging its viewers to replay the piece, not only for laughs, but also for all that was missed.

Engel is no stranger to lensing viral shorts; Beardtown USA follows his celebrated film, This Is It, which upon release was Staff Picked by Vimeo, Buzzfeed, Huffington Post, College Humor and even climbed to the front page of Reddit.