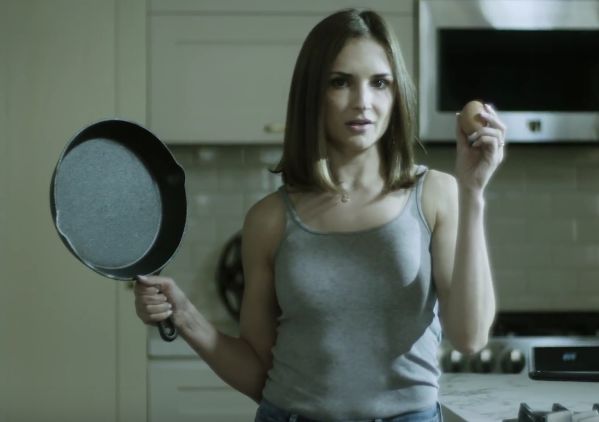 Marking 420 2017, Green Point Creative and director Ryan Kleier from Motiv Creative have partnered to create the latest PSA in Green Point’s on-going campaign to change discriminatory drug enforcement policies – a recreation of the classic “This Is Your Brain” ad from 1998, with original actress Rachael Leigh Cook reprising her role as the pan-wielding Gen X'er. The new PSA breaks on April 20, 2017 on various websites including YouTube and Facebook.

“Ryan at Motiv came up with the original egg concept and after the Drug Policy Alliance signed on, we further developed the spot,” Bowler says. “Once we had the script locked and the project in motion, we decided to approach Rachael Leigh Cook to see if she would be willing to recreate her role for this new message. We discussed the idea with her and after she had time to consider the issue, she came aboard. Clearly her presence adds tremendous credibility to the message.”

The PSA begins in a way that will be recognisable to those who recall the original – with Cook holding up an egg and a frying pan. Only this time she says, “This... is one of the millions of Americans who use drugs, and won’t get arrested.” She then holds up a brown egg and says, “However, this American is several times more likely to be charged with a drug crime. Imagine it’s you.”

From there the spot transitions into an animated sequence, created by post house Edit 1, New York, that follows what happens to the brown egg after his arrest for drug use. With narration from Cook, we see a montage of the unlucky brown egg first being sentenced to a lengthy prison stay, and then once released finding the stigma of that conviction reverberating negatively throughout his life - from being denied employment, financial aid for college and seemingly any chance at a successful life.

The spot ends with Cook back in the kitchen, holding a pan dripping with smashed brown eggs, delivering the spot’s closing argument: “The Drug War is ruining people’s lives. It fuels mass incarceration, preying on people of colour in greater numbers than their white counterparts. It cripples communities, costs billions and it doesn’t work... Any questions?”

Cook says, "Ava DuVernay's '13th' was a complete revelation for me. The shocking, cold water education her documentary presented compelled me to reexamine my own involvement with a larger movement that has gone on to harm so many. When my unique position brought about the opportunity to raise my voice again about this issue, I knew it was the right thing to do. My hope now is to bring attention to the wildly unfair practices of drug sentencing and advocate for their reform."

This new spot is the latest salvo in Green Point’s on-going campaign against cannabis prohibition and a judicial system that routinely targets minorities. In addition to the new PSA, the company is currently developing an original scripted, fictional series based on the “war on drugs”.

“The goal of this PSA is to bring attention to the mission of the Drug Policy Alliance so that our legislators to take an honest look at our drug laws and how they are applied.” Bowler says. “Cigarettes, which has the highest mortality rate of all drugs, is not a scheduled drug, and drugs like cocaine and prescription opioids are considered less dangerous than cannabis. The existing drug laws are a gateway to prison and a life of hardships.”