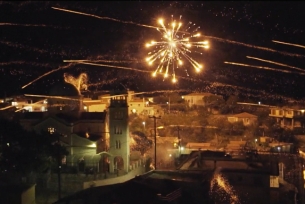 The filmmakers at the creative collective known as Variable have found another captivating story to tell. In “Rocket Wars,” which debuted on their Vimeo channel on June 30, Director Salomon Ligthelm and Cinematographer Khalid Mohtaseb travelled to a remote Greek island to witness a war-like confrontation that’s actually a celebration of peace.

Told with documentary style interviews and stunning visuals, “Rocket Wars” is a five-minute account of a traditional event that takes place in the village of Vrontados on the small Greek island of Chios. There, for over a century, parishioners of two Greek Orthodox churches have engaged in a mock battle on Holy Saturday, firing more than 100,000 homemade rockets at each other’s churches once the sun goes down.

Much like Variable’s earlier shorts, “Holi,” “A Reflection” and “8 Hours in Brooklyn,” “Rocket Wars” is an experiment in short-form storytelling in which the producers tap into the latest digital image capture technology to create cinematic images of startling clarity and emotion. Often working in a high-speed format that slows down motion to a meditative and surreal pace, “Rocket Wars” represents a hybrid mix of narrative and documentary designed to elevate the storytelling capabilities of both forms.

Ligthelm and the core Variable production team were inspired and eager to film the event this year upon learning of its existence. The director says he felt that, given the accelerated appetite of social media today, this may be the last year they’d have had an opportunity to document it before it becomes something of a media circus.

“And our aim here is not to commercialize this, but to create a timeless art piece similar to what we did while covering the Indian festival of Holi,” Ligthelm adds. “We’re looking to share the culture and tradition of ‘Rocket Wars,’ and to celebrate the art and beauty of the event. Our overall aim in making this film is to keep it pure.”

Executive Producer Tyler Ginter says ad agencies, marketers and media companies can apply the techniques Variable used to make “Rocket Wars” within their own strategic marketing needs. “We’d like brands to realize they can capture their own one-of-a-kind events and experiences in a similar way,” he notes. “Films like this are an example of a new genre that merges narrative and documentary filmmaking together to create something with a new look and feel. In this era of experiential marketing, the possibilities for brands to harness these techniques and share authentic experiences that resonate with people around the world are endless.”

While a labor of love itself, “Rocket Wars” is also a reflection of a sense of devotion that feels lost in the modern world. “Seeing people with so much passion for the craft and tradition of rocket-making was invigorating to witness while filming,” says Ligthelm. “The idea of giving your heart and soul over to something that you love is at the core of the story. We’re all after something we can give our lives to, something that can help create deeper connections with each other. It’s strange to think that this event can do it – but that’s a reality for many in Vrontados. They live and breathe rockets, and that’s what brings them together, especially during their Easter holiday.”

To make “Rocket Wars,” the Variable team worked in a well-choreographed yet run-and-gun fashion that utilized cutting edge digital video cameras – including the Phantom Flex 4K and Red Dragon 6K. In addition, the Sony a7S was mounted to a remote controlled helicopter (drone) to shoot stunning aerial cinematography in the most extreme low light conditions. Indeed, the production presented a host of technical and logistical challenges that required extensive planning, testing and preparation, explains Producer Alex Friedman.

The technology they utilized played a key role in allowing Variable to create the film’s raw, natural visual style. “When combined with the expertise of our core team, the results are incredibly cinematic sequences that were produced in a very difficult environment and under truly chaotic conditions,” Friedman adds. “But that’s the beauty of the cameras, lenses and software we have at our disposal. They’ve given filmmakers like us the opportunity to create feature-film looking results with a small crew that can generate powerful emotions and that exude authenticity.”

Variable worked closely with Snaproll Media whose FAA-certified pilots and camera operators filmed all the aerial cinematography. Snaproll is one of the film industry’s leading UAV cinematography services, and was one of the very first FAA-certified companies to fly high-end digital cinema camera systems on feature films, commercials and documentaries around the world.

“Working with a lightweight Sony digital camera, the a7S, allowed Snaproll to set it up quickly and get in the air within minutes,” says Mohtaseb. “Since it was so low profile, our extremely talented pilots were able to dodge rockets in the sky to get some incredible shots. Many people have asked if these aerial shots were created in post, but everything was filmed in camera.”

The inspiration to make “Rocket Wars” came when Ligthelm stumbled across a video of the event on YouTube. “At first, I thought it was a war in the Middle East, but I soon discovered it was just the opposite – a tradition started in Greece to maintain the peace of that region.” Fascinated, he set out to film it: “I felt there was something about the juxtaposition of the ‘spiritual’ and the ‘brutal’ that could be worth exploring.”

“Rouketopolemos” (literally Greek for ‘rocket-war’) is held annually during Greek Orthodox Easter (a week before the holiday is celebrated in the US). Teams loyal to one of two ‘rival’ churches fire homemade rockets at each other from locations across town, with the objective of hitting the bell tower of the church of the other side. Firing from a distance of approximately 400 meters (about the length of four football fields), they use rockets consisting of wooden sticks powered by an explosive mix containing gunpowder, launched from temporary platforms.

The townspeople make the rockets year-round in anticipation of Rouketopolemos, which draws tourists from around not just Greece, but surrounding countries. In the face of harsh economic turmoil, the event has helped support the town’s economy, and while technically illegal, it’s looked at askance by local authorities.

Its origin is unclear, say the producers. One theory researched by the Variable team dates the event to the Ottoman Empire in the 19th century, when ships patrolled the coast to ward off pirates and fired off cannons each Easter. Another holds that churches on the island faked a civil war during the Turkish occupation so they could celebrate Easter without being plagued by war. Accordingly the ruse worked, as the Turks kept a safe distance, allowing the villagers to attend Easter Mass.