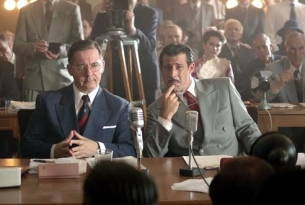 We’re whisked back to the late 1940’s as we become a fly on the wall in the incredibly tense but comedic Pizzeti case. The International Snack Committee have held an emergency hearing for Mr Pizzeti, who claims to have put real cheese in his honest snack. His claims are dubbed preposterous by the committee and the President goes on to accuse Mr. Pizzeti of lying – it’s impossible to add real cheese to a snack.

The film’s strength lies in the brilliant casting of the Committee President (Tom Knight) and Mr. Pizzeti (Greek actor Letferis Eleftheriou), who along with the unique idea bring the film to life.