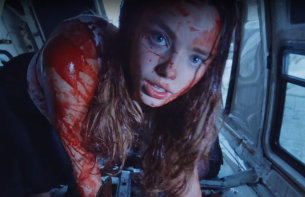 The music video tells the story of a bank heist gone wrong, all shot from first person POV in seemingly one continuous shot. The hero desperately trying to save a hostage amidst the total carnage that ensues.

The film’s visuals perfectly match the atypical intensity of The Weeknd’s latest track, hurtling along at the breakneck speed you’d expect from Naishuller, the director behind the viral sensation Bad Motherfucker (128 million views and counting) and this year’s ‘Hardcore Henry’, billed as the world’s first POV action movie, an insane 90 minute edge-of-your-seat piece of POV madness that follows a newly recostructed cyborg on a relentless mission to save his wife, The former winning countless awards globally, the latter winning the Midnight Madness award at last year’s Toronto film festival before opening on 3,000 screens in the US earlier this year.

Whilst undeniably violent – False Alarm boasts masked men, car chases, explosions, insane stunts and lots and lots of blood - there’s also a softer thread that runs through the film in the protector/protectee relationship between the hero and their hostage.

“It was critical to get the right girl for the lead as she not only had to carry the romantic aspect of the story but be a tough actress able to work in not the most pleasant of conditions,” states Naishuller. “We auditioned over 250 girls but Kristine Froseth (who has just been cast as one of the lead actors in TNT Vampire drama Let the right one in) caught my eye right away. She possesses the unique mix of seriously impressive acting chops, a very fragile beauty and tops it off with a superbly tough yet easy going character. I think she enjoyed being around explosions and cars flipping as much as the guys on set did.”

Shooting in LA rather than his native Moscow was a departure for the director, as was his choice of camera for the project.

He had first experimented with POV filming when he invested in a GoPro for a snowboarding trip, shortly before discovering that he actually sucked at snowboarding.  Needing to find another use for his newly acquired GoPro, he decided to shoot a music video for his band Biting Elbows. The resulting video, The Stampede, garnered over 6 million views on YouTube and the attention of Great Guns, who have represented him since. He subsequently shot Bad Motherfucker and Hardcore Henry on GoPro too.

For False Alarm, however, Naishuller wanted to give the film a more cinematic look, ultimately settling on using the Codex Action Cam, a relatively new device that, until now, has largely been used to shoot elements for action scenes in big Hollywood movies.

“After Hardcore Henry, I was pretty much set on not doing anything POV related, at least in the near future. But when this track from The Weeknd came in and I listened to it, I couldn’t help but get excited for the possibilities,” says Naishuller. The key, in my mind, was to make sure that whatever I shot in POV had to be a step up from all that came before, which I believe my team and I have accomplished in the video for False Alarm. Apart from the faux continuous-one-shot feel of the video, the visual aspect of telling this simple yet elegant ‘crime doesn’t pay’ story was greatly improved by using the Codex Action Cam which was introduced to me by Starr Whitesides, our DP on the project. It made the film feel much more cinematic than is expected and took the visuals to the next level.“

Shooting a music video for an artist that wasn’t his own band was another novelty for Naishuller, and a thoroughly enjoyable experience at that.

“I think Abel’s approach to this project was very smart. He picked a director whose work he enjoys and let him go wild. His notes were minimal and very constructive, with each and every one of them, bar none, making the video better. Our mutual appreciation of each other’s work made this a true collaboration and I am ecstatic that he is as happy as he is with the video.”

“With ‘False Alarm’, the second single released off The Weeknd’s upcoming album Starboy, we’re getting a whole new take on R&B prophet Abel Tesfaye’s range” states The Times. “Tesfaye usually restricts himself to smoother tunes, letting his falsetto do the work. But ‘False Alarm’ is an uncharacteristically frantic, up-tempo ode to unrequited love, his signature delivery interrupted and heated up with raw, unrestrained shrieks. The song has a distorted 80s vibe—and an underlying energy with eerie edge.” A furious energy matched by Naishuller’s impressive visuals.