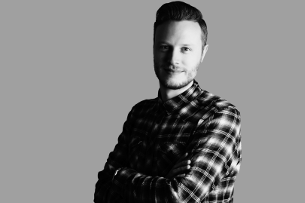 Gramercy Park Studios has announced the promotion of Sam Cross to Sound Designer.

His promotion comes after four years at the integrated post production facility within audio transfer. Having joined the company in its early stages, Cross has been instrumental in developing the sound department into the award-winning entity that it is today.

On his promotion, Cross said: “Becoming a sound engineer comes with a multitude of new challenges and pressures as it’s almost exclusively a client-facing role, but I’m excited to push myself further. It's great to be working alongside two very experienced and creative engineers, and as we’re such a close-knit department my transition into engineering full-time should be very smooth. Having been at Gramercy Park Studios since its inception, it’s really rewarding to see just how talented a team we’ve built and the work we’re creating. We have a great team ethic that makes the working day genuinely enjoyable and a huge factor in wanting further my career at GPS.”

Cross, who is already building a strong client base, points to his work for Dyson and short animation Dead Ahead - hugely successful at various festivals and chosen by Vimeo as a Staff Pick, garnering 240,000 views to date - as highlights so far. Other work includes promos for The Science Museum with Grey London, where he reinforced the quirky nature of the visual with a soundbed to match.

Prior to joining Gramercy Park Studios, Cross worked at 750mph for five years. His promotion at GPS coincides with the expansion of the wider facility in Central London and the opening of a new sound suite. Equipped with the latest Avid hardware and the modular Pro Tools S6 mixing console, the suite is fully equipped for mixing 5.1 and 7.1, allowing it to service sessions across all formats and platforms.

Toby Griffin, Head of Audio at Gramercy Park Studios, comments: “We’re delighted that Sam has agreed to continue his progress with GPS. He has worked tirelessly over the past four years to help build our reputation and not only is he technically outstanding, he’s a fantastically creative sound designer.”

“Clients new and old are in safe hands with Sam and we’re excited to have a young and talented sound designer, reinforcing our commitment to up and coming talent, bolstering the creative output here at Gramercy Park Studios,” adds Richard Ireland, MD of GPS.