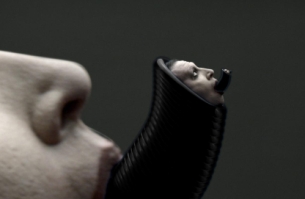 Colourist Ben Rogers completed the monochromatic grade for the video, which will accompany the single from Marilyn Manson’s new album ‘The Pale Emperor’.

‘Deep Six’ depicts Manson and a female model as they’re encapsulated by a CGI black corrugated tube. The surreal film combines both analogue and digital techniques in order to create visuals immersed in sexual connotations.

Director Bart Hess says "Inspired by the song's lyrics, I wanted to generate creatures that feel as if they’re partly made of pulsating water that would slither through space on the rhythm of the track. These worm- and snake-like creatures swallow bodies on their path and taking them into a black void, where the bodies become the worms themselves.”

"Playing with the tactility of the material I wanted to create something that is partly animalistic and inanimate, working without the use of 3D renderings. The technique is a combination of analog and digital, where an objects gets repeated in space, therefore showing its movement in time."

Colourist Ben Rogers comments “A lot of time was spent on the beauty aspect of the grade as it was part of the aesthetic of the actual look, as well as enhancing and dramatically changing the grade on the worm effect shots.”

On working with Manson, Hess adds “It was a great experience to work with an artist of the calibre of Marilyn Manson and I had some very interesting discussions about art and the techniques used in this video and proportion and repetition in nature. The shoot was demanding on Manson in terms of interacting with objects and imagining the final result once the object would be repeated to create the worm creatures.”

“The shoot was surreal! We had a virtually naked girl jumping on trampoline pretending to be swallowed by a worm and guys running around in white body suits waving balloons and Manson pretending to be a worm. It's clear that Manson is a talented artist on so many levels and has a lot of experience as a filmmaker so there were at times a clashes between our ideas but ultimately I think that we worked very well together.”