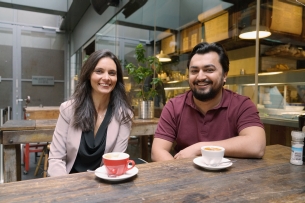 GPY&R Sydney today announced the recent promotion of Lucielle Vardy to Executive Planning Director and the addition of Senior Planner Waqas Tahir.  These appointments take the planning department in Sydney to nearly the same scale as both its creative and business management teams.

Chief Strategy Officer Jon Steel says: “Lucielle has made a great contribution to the agency since she arrived two years ago. She’s a wonderful leader and mentor to the planning group, brings a unique cultural and multidisciplinary perspective to her work, and balances her considerable planning skills with common sense and good humour. As her pioneering work with our ‘natural habitat’ RECON research methodology demonstrates, she’s also keen to spend much of her time where planners should be – out in the real world, talking with the people who really matter.”

Group MD Andrew Dowling adds: “Our industry is overly distracted by shiny new Models, so I’m hesitant to use the word.  But over the past several years we have recruited planners with a range of brand, media, digital, social, data and shopper expertise, allowing us to apply a combination of varied skills to solve client business problems. While the specialties are increasingly more diverse, the focus on planning isn’t new. For over 80 years, we have believed the secret to influencing Australians is to first get inside their heads and understand how they think and how they behave in a variety of situations and environments. So, just as the Australian culture continues to evolve, it makes good business sense to invest in a diversified planning team that spends more of its time having conversations with regular Australians than it does talking about advertising.”

Andrew added, “Miranda is a bright spark and a very strategically minded business manager who works in close partnership with Lucielle’s team. We’re thrilled to have her grow with the agency over the past four years.”