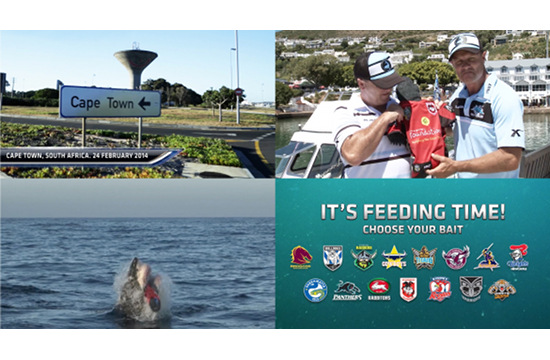 The Cronulla Sharks have unveiled their 2014 campaign, the likes of which the NRL or any other sporting team worldwide has never seen before.

Joined by shark conservationists and award-winning shark documentarians, the boys set about giving the NRL a taste of things to come in 2014.

Taking the seal decoys used by scientists to study the behaviour of Great Whites, the lads dressed them in each one of the opposition’s team jerseys before throwing them overboard, one by one.

Said Ettinghausen: “It literally took two minutes for a four point five meter monster to come out of the water and sink its teeth into the Manly strip.”

Importantly, the entire activation was conducted under the supervision of shark experts, using specially designed soft decoys that are regularly used in research.

The tattered jerseys themselves will be auctioned off to fans later in the season with all proceeds going to shark conservation.

Conceived in collaboration with Patts Y&R Sydney, the content will be available to fans at the Sharks website, as well as appearing during home games at Remondis Stadium and on interactive print that let fans Blippar video evidence of how a Bulldogs, Knights or Titans shirt was torn to shreds.

The ultimate sledging tool, ‘Feeding Time’ will also let fans share content with their mates ahead of each game.

Said Cronulla Sharks Chairman Damian Keogh, “We’ve set some pretty aggressive targets for ourselves this year. ‘Feeding Time’ is a fresh way to send that message and at the same time ignite the passion of our loyal members and fans.”

Added Y&R Group MD Andrew Dowling: “When the creative guys Bart and Dave came to me with the idea my immediate reaction was ‘What the hell?’. But then the 30+ year Sharks loyalist in me kicked in and it became ‘Hell Yeah!’. I immediately picked up the phone.”

The ‘Feeding Time’ activation is part of the broader repositioning of BORN WITH IT, created for the club by Patts Y&R Sydney, reaffirming to fans Australia-wide that ferocity, fearlessness and a sense of fun are some of the qualities that the Sharks have had from day one.

Asked if they had anything to add, Patts Y&R Creative Directors Bart Pawlak and Dave Joubert responded with three words: “Up, up Cronulla!”