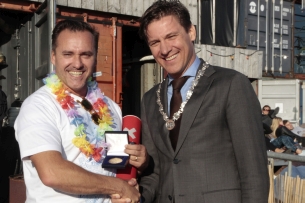 Creative Director, Alvaro Sotomayor, has been awarded a prestigious honor by the Amsterdam City Council in recognition of his creative contribution to the city over his 20-year career at Wieden+Kennedy Amsterdam.

Sotomayor was awarded the ‘Andreas Award’ during a surprise party thrown by W+K Amsterdam to celebrate his 20-year anniversary of working at the agency. The accolade, known in Dutch as the ‘Andreaspenning’, is an official government honor awarded to individuals for ‘exceptional achievements in the domain of sports, art, politics, media or education in the city of Amsterdam with demonstrated influence beyond the city and national borders’.

Spanish-native Sotomayor was one of the agency’s first employees, joining as a junior art director in September 1995 as part of a team to help introduce Nike to the European market. Renowned for his positive disposition, Sotomayor has had significant impact within the agency and on Amsterdam’s wider creative scene in the past two decades, which has firmly established him as a figurehead and ambassador of the city’s creative industry.

In 2011 he founded The Kennedys – W+K Amsterdam’s creative incubator program that nurtures and grows diverse talent within it’s own walls for seven-months each year; he’s a board member of Advertising Design Creativity Netherlands (ADCN) and the Hub Amsterdam, an international entrepreneurial-ship platform; was the first non-Dutch born advertising creative to be inducted into the ADCN’s prestigious Hall of Honors; and is a passionate artist and activist. In 1997 Sotomayor was part of a highly acclaimed anti-bullfighting campaign in Spain, which led to the practice being banned in Barcelona; in 2004 he joined the official Dutch cultural delegation to Beijing with the aim of getting art higher on the Olympic Games agenda; and in 2012 he was part of an expedition to Palestine where he collaborated with the famous street artist Banksy to give a new ‘face’ to the West Bank barrier.

Upon presenting the award to Sotomayor Amsterdam City Council alderman, Pieter Litjens, said, “Alvaro has been an integral part of the Amsterdam community for exactly twenty years now and is the embodiment of some of the city’s best characteristics: a focus on entrepreneurship, openness to international talent and, above all, creativity. We’re delighted to present him with this award in recognition of his many achievements and look forward to continuing to work together in this great city for many more years to come.”

On receiving the award Sotomayor says: “In 1995 I first walked into an agency where the motto is ‘walk in stupid everyday’ and I felt immediately at home. Twenty years later I still walk in stupid each day and each day I fall in love with W+K Amsterdam and everyone in it all over again. It humbles me to be officially recognized with this award for doing my job when I’m just having the time of my life. I want to thank everyone who made it possible.”

Now Creative Director on Corona, Sotomayor previously led the Nike and Electronic Arts accounts and has worked on Heineken, Coca-Cola and Vodafone, to name but a few, during his tenure at W+K Amsterdam. On his most memorable and favorite work, Sotomayor cites – helping Amsterdam’s filmmuseum transition to the National Film Institute and rebranding it the EYE in 2011, The Kennedys’ 2014 project ‘Free Our Voices’ for Child Helpline International, the ‘Unstoppable’ Nike activation in 2012 that used paintballs to create an image of Rafa Nadal and Heineken TVC The Entrance, the first spot made for the brand by W+K Amsterdam in 2011.

Wieden+Kennedy Amsterdam Executive Creative Directors, Eric Quennoy and Mark Bernath, say: “Alavro is the soul of Wieden+Kennedy Amsterdam. Our minister of culture. Our ambassador of altruism. The first to identify when an opportunity to get on our agency boat has arrived. And the last to leave the dance floor. We’re so lucky to have him and are elated that the Dutch Government has recognized his brilliance in such an official way.”

What’s next for Sotomayor? He’s already looking forward to celebrating his 40th anniversary in 2035.