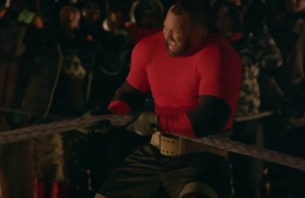 Caterpillar and Ogilvy & Mather New York have exposed where a fan favorite Game Of Thrones character has been hiding out. In the seventh #BuiltForIt Trial, part of the series of awareness raising videos from the brand, Gregor ‘The Mountain’ Clegane makes an appearance, showing off his monster strength in the new video spot, ‘Tug of War’.

The actor and recent winner of the World’s Strongest Viking competition, finds himself partaking in a real life game of tug-of-war with one of Caterpillar’s strongest bulldozing machines, the D-10. The battle of strongest bulldozer vs. strongest Viking is shot in Iceland, a country known for their strong-man heritage. In the spot, the battle heats up and hundreds of townspeople surround the strongest Viking, eventually joining in to help tug the rope. When the driver switches the gear to neutral, the machine is defeated, allowing for a victorious celebration from the Strongman and his helpers.

‘Tug of War’ is the seventh video installment launched by Caterpillar and O&M New York that showcases the unique capabilities (and in this case, strength) that Caterpillar’s machines embody.