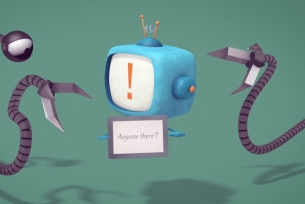 Gorilla Gorilla! won the award for 'Infobot' an animated film created for Informa - one of the world's leading knowledge providers.

Informa approached Gorilla Gorilla! to create an animated character that could lead an internal campaign to raise awareness and understanding of the importance of data protection.

Gorilla Gorilla! came up with Infobot - a fun, likable character that could deliver a serious message in a compelling and memorable way.

Dean Beswick, Founding Partner at Gorilla Gorilla! who accepted the award from film critic Mark Kermode says: "Creating a film to engage 6500 employees from 25 countries was never going to be easy. But we managed to crack it with a playful, animated character that spoke to everyone and got the message across. It was a real collaborative effort with the comms team at Informa and we're chuffed to bits that the work has been recognised".