Google Champions Advocates for the Americans with Disabilities Act 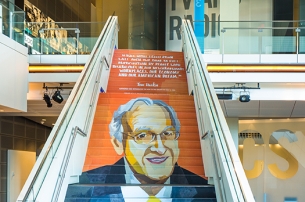 In 1990, Americans with disabilities pulled themselves up the steps of the U.S. Capitol Building to question and protest the lack of accessibility standards in America, this action is known as the Capitol Crawl. Their unprecedented actions helped lead to the passing of the Americans with Disabilities Act 25 years ago, the first groundbreaking piece of legislation for Americans with disabilities. Google teamed up with 72andSunny as a strategic and creative partner to take to the steps of Washington D.C. to honour the anniversary of the ADA, and some of the heroes of the Disability Rights movement.

As part of the Google Impact Challenge: Disabilities, Google wanted to highlight and give voice to the unsung heroes who fought and are still fighting for equality. On six different historical sites around Washington D.C., portraits of nine leaders of the Disabilities Rights movement were plastered to stairways in a symbolic effort to  celebrate the Capitol Crawl and the anniversary of the Americans with Disabilities Act.  Google and 72andSunny commissioned artist Darren Booth to execute the portraits which also feature a quote and a bio of each individual.

Google chose to work with Darren Booth because of his fresh and modern style that is unique and compelling . Booth  paints on various textures to give his artwork a collage feel while honouring the subjects that he is illustrating. 72andSunny’s in-house studio enlarged the artwork and broke it into panels to fit each set of staircases.

The featured portraits include Claudia Gordon, Patrick Kennedy, Justin Dart Jr., Ed Roberts, Tatyana McFadden, Judy Heumann, Tom Harkin, Kathy Martinez , Tia Nelis and Eunice Shriver (LA only). These portraits will be found on the stairways of Gallaudet University, The Woodrow Wilson Plaza, The National Portrait Gallery, the American Museum of Natural History, the Newseum and Carnegie Library, which features a quote from President George H. W. Bush who signed the ADA into law in 1990.

Simultaneously, Google also has a tent at Sponsor Village at the 2015 Special Olympics in Los Angeles. The tent will feature various activations including a “What If?” wall and a gallery of innovative products from Google.org’s grantees. Those attending the Special Olympics can visit the tent from July 24th through August 1st.