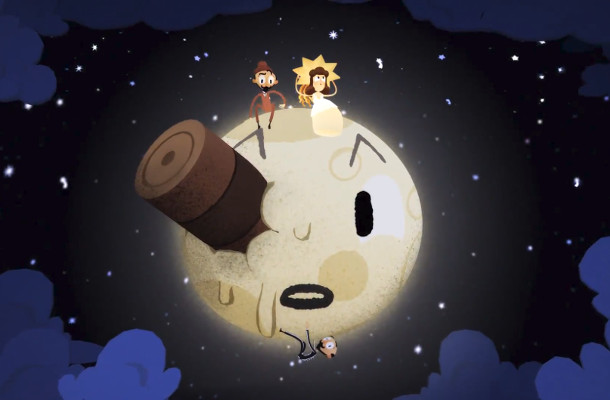 There’s a little website you may have heard of called Google.com. And if you head there now you’ll be treated to a delightful treat - a 360-degree video paying homage to filmmaking pioneer George Méliès. Famous for his films at the dawn of the 20th Century such as ‘A Trip to the Moon’ and ‘The Impossible Voyage’, Méliès is credited with inventing many special effects techniques that set the ball rolling for the cinematic spectaculars we’re used to watching today.
Weaving together much of what charmed people about Méliès’ films well over 100 years ago into a new immersive narrative for people to explore, ‘Back to the Moon’ is a unique blend of the most cutting-edge storytelling techniques of the 1900s and the 2010s.
In addition to being featured on the Google homepage for 48 hours as the 15th Spotlight Story, ‘Back to the Moon’ is also being distributed through the Spotlight Stories app for iOS and Android, as well as on Google’s Daydream VR platform. The film will also be available on high-end VR headsets via Steam and Viveport.
LBB’s Alex Reeves borrowed a moment with directors FX Goby from Nexus Studios and Doodle’s Hélène Leroux to find out how they feel about this gigantic undertaking.
LBB> How do you feel about your work being seen on 'the front page of the Internet'?
FXG> It’s super exciting but I feel like never again will my work be seen as much. That’s a fact. You can’t beat the front page of Google. Unless I do something dramatic in my life like save the world this will probably be my biggest achievement ever, It’s going to be seen by billions - it’s hard to even comprehend that!
LBB> Where was the project when Google first came to you and how has it developed from there?
FXG> The foundation was there - Méliès, even some elements of the final story. What I did was help focus on what we wanted to say in a short space of time. There were a lot of ideas but choosing is often about giving up great ideas so that others can shine. We did a lot of back and forth to discover the heart of this project and how to pay the best tribute on the limited time we had. How we could use every single scene to help tell the story, how colour palette, animation, lighting and choreography can all come together and be at each single moment super meaningful!
LBB> It's a totally multi-channel experience. Where did you start with it and what were the differences between working for the different platforms?
FXG> The foundation is as it would be with a film - you write a script, etc., but VR adds a new dimension which is the fact that anywhere you look something can happen. There are layers of story, main and secondary characters, main and secondary action. By layering the story we can create the depth required for an interactive experience.
HL> A Doodle on a big scale means telling a story for as large an audience as possible, however they are watching it. In total we have five different versions, and every version will adapt according to what platform you view it on.
LBB> What ways did you want to pay homage to George Méliès and how did you want to take it forward?
HL> Méliès was a genius beloved today but forgotten during his life. We wanted to celebrate his incredible contribution and passion. Without him cinema wouldn’t be cinema. We reference his colour palette, how he used live music, the physical tricks like the first special effects he used. We wanted his most famous films to be present in the film, as well as characters from his work. We used all these elements to tell our own story.
LBB> What were the priorities in telling the story?
HL> We tried to make a film that was entertaining, that would pay a respectful tribute to Méliès’ genius as well as telling a compelling story in 360°. First and foremost it’s telling an entertaining story of Méliès through little winks and hints and some of his best known films.
LBB> What were the biggest challenges in the process?
HL> Well there are obviously the technical challenges of storytelling in a new medium, but focusing here on the creative, for me it’s using VR to tell a story without overwhelming or losing the audience. Our challenge is to create an epic experience with a considered approach, and avoid the temptation I think all of us have felt at some point, to try and tell a story on every single area of the image.
LBB> What are your favourite moments that people might miss if they're not paying attention?
FXG> First time, watch the main characters. Second time, watch the musicians, they’re going through a lot...
view more - Behind the Work