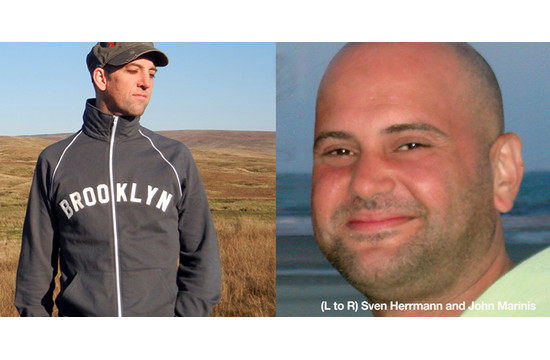 Creative Studio Goodpenny has welcomed top editors John Marinis and Sven Herrmann into its fold. The additions come on the heels of Goodpenny’s Telly Award-winning spot for H&M, Grammy Award-winning mix for Jimmy Fallon’s Blow Your Pants Off, and score for the highly acclaimed Sleepwalk with Me.

Marinis brings vast experience to the Goodpenny edit team, with a reel that includes work for ESPN, Johnnie Walker, Olay, Hershey’s, YouTube, Kenneth Cole, Volkswagen, Tanqueray, and Nissan, among many others. He has collaborated with a torrent of top agencies and directors while working at many of New York’s top shops, including Cutting Room, Crew Cuts and Cut+Run. With an upbeat and vibrant approach to editing, Marinis emphasizes collaboration and fun as keys to his success.

“Goodpenny just felt like a natural fit,” Marinis says. “It’s a highly creative, open, and collaborative environment. I am excited to join the team and grow with the company as well as with my new colleagues.”

Raised in Mexico City; fluent in English, Spanish, and German; and adept in TV, film, music videos and documentaries, Herrmann is well-known for his strong creative vision built on expertise in many disciplines. With a natural eye for storytelling and more than 15 years experience working with agencies in both the general and Hispanic markets, Herrmann has cut for General Motors, Coca Cola, American Express, FedEx, Nissan, McDonald’s, Kraft Foods, Colgate-Palmolive, Pepsi, AT&T, Bacardi, Kellogg’s and Sony Music. Earlier this year, Herrmann won two Gold ADDY awards for a Verizon FiOS spot.

“I’ve been working with Goodpenny for quite a while,” notes Herrmann. “Both Goodpenny and I have realized we’ve got a match.com connection. I’ve felt like a part of the family since day one – everyone’s so dedicated and happy. It’s good to have a home like this.”

“The Latin market is growing and is an essential facet to any post business now,” explains Goodpenny Partner Bruce Ashley. “Having Sven as part of our team is a very exciting prospect for us, as we are able to better serve our clients in this market. Not only is Sven multilingual, but he is a super-talented and experienced professional editor with a creative flair that serves him in both the Latin and general markets. We are more than excited to have him as part of our growing team of artists (and now we have a second pilot in the family). With John, given the diversity and caliber of his work, he is clearly an exceptional talent and complements the team with a specialty in comedy and dialogue. He’s one of the most enthusiastic, creative and dedicated editors I have met.”

Goodpenny is also excited to announce that, in addition to Bob Jenkis and Sylvette Artinian, it will represent veteran editor Tim Sherry for his editorial projects. Tim has worked on numerous high profile campaigns, such as Gillette’s “A Best a Man Can Get,” and for top agencies and brands in his career, counting Converse, Pepsi, and GE Electric as some of his collaborations. Tim has a Clio and a Golden Lion to his name, along with several other achievements, and he has worked with notable directors Joe Pytka, Klaus Obermeyer, and Michael Karbelnikoff. Tim brings a unique diversity and creative expertise to the Goodpenny stable and is an exciting addition to a steadily growing team of award-winning editors and creatives.

“I am so excited about how Goodpenny is growing,” states Goodpenny Partner Rasha Clark. “Besides being a post house that can accommodate all aspects of a project from edit and music to finishing, which allows us to be very competitive, we are that studio of amazing talent and really good people – John and Sven are the perfect addition to this family. They are both great with dialogue and comedy, John loves cutting really visual projects, and Sven edits in three languages. It’s becoming the United Nations over here, which is a reflection of the way that NYC and the world is becoming more of a global community, especially in the advertising market. Talent and clients are realizing what we offer here and that we stand out for all of the right reasons.”