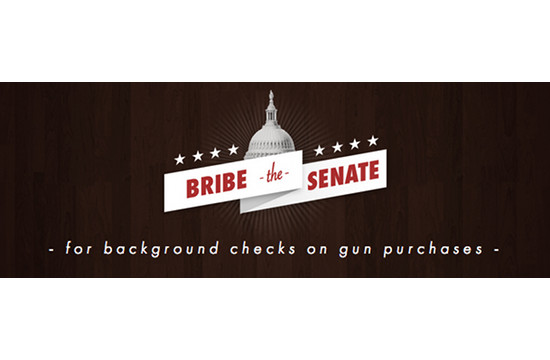 Nine days ago, a website called  bribethesenate.com popped up with a provocative proposal.

Maybe, they suggested, the American public should outthink the gun lobby and crowd-fund a little “financial persuasion” of their own to see if senators would be willing to change their votes and actually debate gun-purchase background checks. After all, it’s a cause that 90 percent of America says they’re behind.

The site is the work of four people (with a little help from their friends) who wanted to restart the discussion about reasonable background checks.

“It bummed us out that less than 100 days ago the country was talking about—and largely agreeing with—the idea of background checks for gun purchases. Then, the Senate refused to debate it, and it fell off the radar,” said Simon Bruyn, one of the people behind the site.

So they launched the site to raise awareness about the background-checks issue, which has gotten less attention in recent months.

But bribes? That’s got to be illegal, right?

It turns out that it is. Super-illegal.

“Honestly, we started this whole thing with the intent to fundraise for the bribes. But the lawyers were very adamant that this was go-to-jail illegal. Not just for us, but for anybody who donated. So we had to change our approach late in the game,” said Bruyn.

And so, when the site’s countdown clock hits zero at midnight tonight—100 days after the Senate voted to keep background checks from even being DISCUSSED—they will not start collecting donations. Instead the site will direct Tweets to the six senators targeted by the site and ask them to revisit their stance on the issue.

In doing so, the organizers hope to point out a frustrating reality of political fundraising.

“We get it. Bribes are bad. You can’t pay a politician to change their vote, ” said Emil Tiismann, one of the site’s creators. “Next time we will form a proper political lobbying organization so that we can collect unlimited cash in order to have a meaningful political conversation with our elected officials where we strongly express our opinions.”

“Please don’t send us to jail for this, ” added Tiismann. “We’d hate to have to share a cell with a mentally-ill killer who bought his murder weapon at a gun show without a background check.”

The site was the brainchild of Bruyn, Tiismann, Jacob Sempler and Andrew Livingston, all four of whom are creatives at advertising agency Goodby Silverstein & Partners in San Francisco.