Good Times are Calling in New Tavern Campaign from LRXD 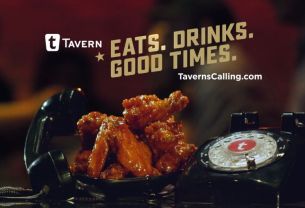 In a pair of ads created by Denver advertising agency LRXD, people receive phone calls from mysterious individuals who entice them with sexy-sounding offers. In one, an office worker gets a speaker phone call from his “favourite blonde” who tempts him to join her and a friend later. The breathy stranger at the end of the other receiver is revealed as a “blonde” ale. Meanwhile, in another spot, a harried mother hears from an order of buffalo wings that lures her with the line, “My buddies and I are all hot and lathered up.”

“The campaign is designed to differentiate Tavern from the glitzy, trendy offerings popping up across the metro area,” explained LRXD’s Chief Creative Officer Kelly Reedy. “We needed to remind people that their favourite bar is right in the neighbourhood.”

THG opened its first Denver bar in 1997 and envisioned it as a neighbourhood spot to hang out—with an emphasis on great service, top-notch food and plenty to drink. THG’s Tavern concept is the heart and soul of the company. Each Tavern uniquely takes on the flavor and personality of the neighbourhood in which it resides. Amenities weaving a common thread through all locations include spacious-yet-cozy lounges, outdoor patios and HD TVs. Several also include rooftop patios and game rooms with pool, video games and shuffleboard. For more details, visit tavernhg.com.

THG owner and CEO Frank Schultz is excited about the new campaign: “The comedic element of the commercial spots helps communicate our philosophy of not taking ourselves too seriously. While it’s a priority for us to provide an excellent experience for each guest, we want to do so in a non-stuffy and non-trendy way by keeping true to our history of being a comfortable and welcoming neighbourhood bar/restaurant.”