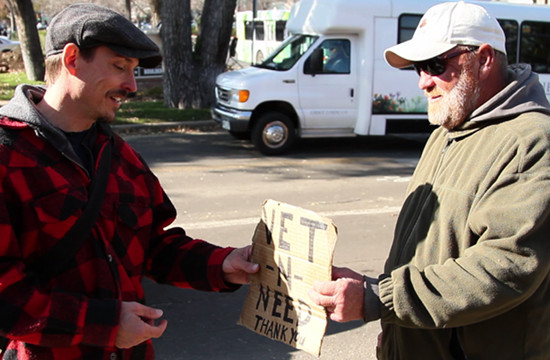 Good Karma $1, a film produced and developed by Alex Bogusky, Kids at Play, and Made Movement’s chief creative officer, Dave Schiff, explores a fundamental, ever-present form of advertising — cardboard signs created by the homeless — and has been acquired by Rainn Wilson's SoulPancake for a limited online run beginning on April 18, 2014.

Bogusky, former executive creative director at Crispin Porter + Bogusky and founding partner at COMMON and FearLess Revolution, turned his celebrated advertising eye to the simple yet effective ways the homeless get their message across.

The film starts with the question of how the homeless, at best tolerated and at worst condemned, ask for help. In an effort to understand this, Bogusky began by paying homeless people for their signs, then collected and analyzed them. Next, he created his own signs. Out of that process grew Good Karma $1, which has won more than a dozen awards, including the Gold World Medal at the 2013 New York Festivals and an Online Video Silver at the 2013 Telly Awards.

The acquisition of the film by SoulPancake is the latest example of the company’s sharing uplifting, thought-provoking content with its core audience of young, engaged creative individuals. The acquisition deal was brokered by David Beebe at Idea to Screen. SoulPancake has had an impressive year of landmarks, including reaching one million subscribers to its YouTube channel; preparing for the launch of its first full-length television series, Kid President: Declaration of Awesome, produced by SoulPancake Television; and debuting a number of successful, viral Web series, including That’s What She Said, The Science of Happiness, and Have a Little Faith.