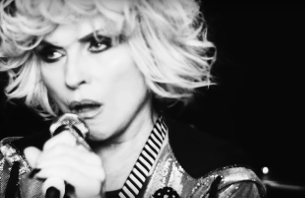 In Good Company director’s Dikayl Rimmasch’s own words, working with music icon Debbie Harry “is like stepping into the bubble that the good witch from the east floated around in, and for a moment you’re in an other dimension. Truly otherworldly.”

Viewers get to experience that mystical allure in the video Rimmasch crafted for Blondie’s new song “Fun” taken from their upcoming album Pollinator. For the all-too-short three minutes and thirty seconds, the audience is transported off planet Earth to head to the ultimate party on Mars.

In crafting the video’s look, Rimmasch and the team at Good Company did their due diligence in revisiting the less-is-more aesthetic of classic Blondie videos. “We studied the videos and they had this quality of not trying so hard to be conceptual or overthought,” says Rimmasch. “They were making them before videos had formulas, so we looked at a lot of references of other videos from that time.”

Intercutting black and white performance footage with lighthearted animations and visions of a killer space soiree, Rimmasch succeeds in capturing the timeless glamour of Blondie in a strikingly different light.