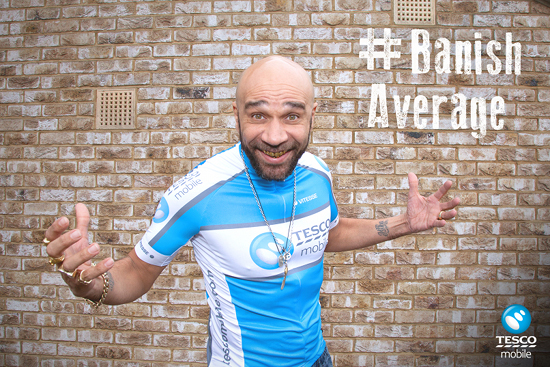 Last year's campaign, #NoJoke, showed the world there's nothing funny about Tesco Mobile. This year the brand wants to build its credibility as a great network provider. Truth is, it is better than most of them, far from average. Why settle for average network coverage when you can get 99% coverage with Tesco Mobile? Why pay more for 4G when you can get 4G at no extra cost with Tesco Mobile. The list continues and we want more people to realise this…Tesco Mobile doesn't do average. They've never settled for it. Nor should you. That's why they're trying to banish it one step at a time, starting with the mundane commute that we all hate. See what happened to a bunch of cyclists on their way home…#BanishAverage.

Matt Kennedy, Senior Digital Marketing Manager at Tesco Mobile said: ‘Too many people settle for the average experience they get from their mobile network provider. With offerings such as Capped contracts, 4G at no extra cost, Anytime Upgrade and our award-winning customer service, we've been proving for years that the Great British public don't have to put up with average. We're taking this message to them with our new social campaign, to show them that they really can expect better from their mobile contract, when they choose to Banish Average with Tesco Mobile.’

Chris De Abreu, Creative Director at Jam said: ‘We are working with a great client, who gets its audience and is not afraid to be bold, and at Jam we love doing just that.’