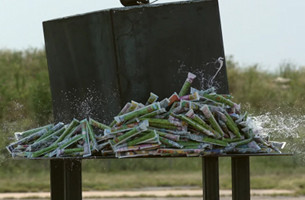 Big Block’s Josh + Vince help DIY legend Bob Vila on his epic journey to get every last drop of Go-Gurt.  The comedy directing duo helms the quirky first episode of The Go-GURT Garage campaign series, in which Bob Vila challenges YouTube sensations to create “Last Drop Extractors” in order to enjoy every delicious last drop from the tube.

First up, Bob Vila teams up with Gavin Free and Dan Gruchy, better known as The Slow Mo Guys. They gurt to it by dropping their massive crushing machine onto a pile of innocent Go-GURTS captured at the hyper-cinematic slow mo speed of 2,500fps. Fans are encouraged to build their own unique extractors and upload a video of it in action for a chance to win the Golden GO-GURT Award.