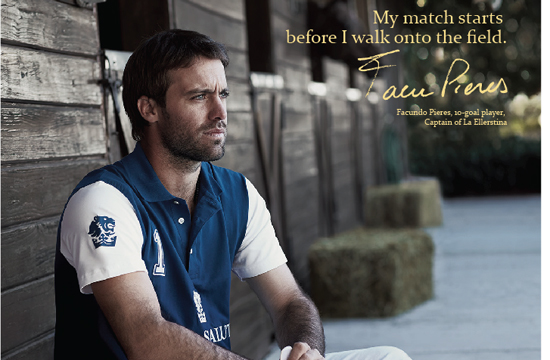 Royal Salute, the world’s leading range of luxury blended Scotch whiskies and worldwide sponsor of polo, has launched a global campaign featuring its new brand ambassador, Facundo Pieres. Pieres is ranked the world’s No.1 professional polo player and the captain of the Argentinian La Ellerstina team.

TBWA\Shanghai developed the global campaign. The print advertisements, shot on location in West Palm Beach, Florida, bring to life the shared core values between the polo player and the brand. Just as vision, boldness and humanist leadership win the game, they also drive Royal Salute – as the first and only whisky range aged 21 years and above – to transcend boundaries of the category and produce extraordinarily crafted whiskies.

“Facundo was a natural fit for the brand, said Patrick Tom, Group Creative Director at TBWA\Shanghai. “His style, approach and commitment to the sport of polo embodies the spirit and philosophy of Royal Salute.”

The result is a visceral print campaign that showcases Royal Salute’ powerful spirit and masculine essence.

Ian Thubron, President of TBWA\Greater China commented, “It’s terrific to be able to drive a high profile global campaign for such a premium brand out of TBWA’s flagship China office. China is no longer a ‘receiver’ but a creator of some of the most important work that we are doing as an agency.”