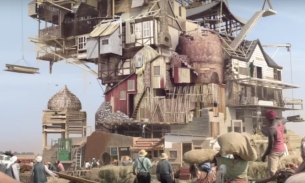 Communications from the DIY/Home Improvement Chain Store Hornbach have always reflected current affairs, but never as closely as this autumn.

The new Europe-wide campaign revolves around the oft-quoted Hornbach slogan “There is always a job to be done.” which resonates with every do-it-yourselfer and gardener. The new campaign shows how the slogan applies far beyond the home. Right now, the slogan also applies to the countries, cultures and religious communities of our world. The campaign will intentionally create associations with the European refugee issue, the wars in Syria and Ukraine, and the Middle East conflict.

Hornbach will remain true to its style and voice, which is never sentimental or obscure.

Instead the new advert will use Hornbach’s normal madness and sense of humour to show what happens when people from different cultures single-mindedly follow their own aims, without communicating or working together. Their common construction project, “the world”, falls apart in front of them all. It is represented by a huge, rickety house made up of countless parts in different styles and built using different methods. After the house collapses, they start from scratch together.

In the campaign, the slogan “There is always a job to be done.” will appear independently from the Hornbach logo, bringing its attitude and the values shared by do-it-yourselfers – solidarity and community – to the entire world. “The values we live each day, as we work on projects where cooperation crosses the boundaries of status and origin can help us achieve success and act as an example to the world we live in,” says Julia Ziegelmann, Head of Brand Communication at Hornbach.

That means Hornbach is using the power of the slogan for a higher purpose. “It was important to us not to pass judgement, but instead to present the broader meaning of the slogan with humour and charm,” says Guido Heffels, the HEIMAT creative director responsible for the campaign.

“Showing such a large number of ethnicities and cultures in an advert is almost revolutionary in the context of a German commercial break. Normally non-western characters are shown in a clichéd, almost caricatured way, if at all.” adds Heffels.

However, despite its global social and political message, the Hornbach campaign never loses sight of the fact that it is advertising a DIY store. It dies not aim to be a social campaign. Instead, it is a traditional Hornbach campaign that clearly references current affairs.

The advert titled “There is always a job to be done.” was directed by the Spaniard Pep Bosch and produced by Trigger Happy in Berlin. The music was composed by Thomas Berlin.

The idea of “flying the flag” will be taken literally in a Europe-wide print and billboard campaign. Headlines such as "7000 languages but only one way to drive a nail into the wall.

There is always a job to be done." will be presented in stylised flag layouts. They will be displayed on building sites in the form of giant posters, which will be photographed for use in the print campaign, while individual flags will grace hoardings and banners. The text for the adverts will be produced by Heimat’s creatives with all their usual confidence.

The advertising campaign will be accompanied by the “The Global Flag Project”, which will be highlighted in sub lines. However, the customer and agency will not release further details until the campaign is underway.