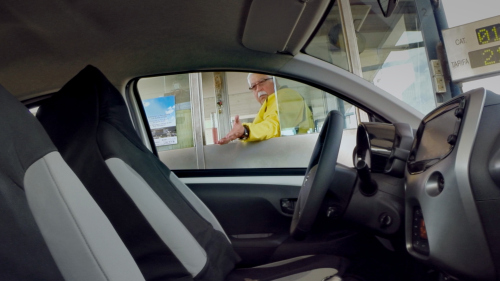 Toyota is launching a co-created multi-channel campaign ‘Go Fun Yourself’ for the new generation Aygo.

Teaming up with online pranksters, comedians, improv actors and YouTube stars to co-create a platform of fun, the campaign intends to emphasise Aygo’s image as the playful, dynamic car of choice suited to those that don’t take themselves seriously.

Comprised of a series of prankster style videos and social media from each market aimed to reach out to a younger audience, the Pan-European integrated campaign will launch in cinemas, on TV, online, social and in print from Thursday 12th June in markets including the UK, France, Italy, Germany and Denmark.

For the launch spot, Saatchi and Saatchi London collaborated with an internet prankster best known for his YouTube Channel, “The Magic of Rahat,” to recreate his Invisible Driver prank across Europe. In the film, Rahat steps into a costume built perfectly to match the car seat of the new AYGO, and suddenly, the AYGO appears to have no one driving the car. Using hidden Go-pro cameras, the film then captures the real reactions of drive-through employees, valets, car wash attendees, and pedestrians as the car pulls up seemingly with no driver inside.

The ad is set to the Fratelli’s track, “Chelsea Dagger,” and is directed by Smuggler’s Jamie Rafn.

Further creative executions and additional social activity with other pranksters is planned to roll out across the year and will be hosted on Toyota.co.uk and Toyota’s YouTube channel: https://www.youtube.com/ToyotaUKTV.

Stephane Rydlewski, brand & communication manager, Toyota Europe says: “AYGO is not just another car, so for the launch we wanted to do things differently. With 'GO FUN YOURSELF', we found the perfect way to express the true spirit of the car - fun, provocative & irreverent, without taking ourselves too seriously. We all have this fun inside, we just need to let it go. This is the magic of the new AYGO campaign.”