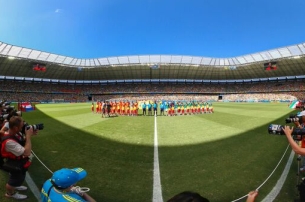 Getty Images, the world’s leader in visual communication, today announced that it will make Getty Images premium 360 degree imagery available for the Oculus virtual reality platform. The 360° View by Getty Images collection will offer a deeply engaging virtual reality experience of enchanting creative stills, alongside some of the world’s biggest moments in news, sports and entertainment.

Available today in the Oculus 360 Photos app on the Oculus Store, 360° View by Getty Images features exclusive, high-quality 360 degree imagery that gives users a chance to revisit and dive into their favorite moments and places, from the Cannes Film Festival to the 2014 FIFA World Cup. New imagery will be continually added, transporting viewers into the heart of the action, from the red carpet of the world’s glitziest events to the playing grounds of sports’ major games and exotic locations from around the world, in this wholly immersive experience.

“Getty Images has always been at the forefront of innovation, employing the latest, cutting-edge technologies to bring our customers best-in-class imagery from the world’s top creative minds and global events as they happen,” said Hugh Pinney, VP of Editorial content for Getty Images. “We know that consumers love our imagery so we are thrilled to partner with Oculus to offer a truly immersive and social experience on their market-leading platform.”

“Captured by the world’s best photographers we have unrivalled 360 degree imagery and it is exhilarating to see this content fuel the next generation of virtual reality experiences. The 360° View by Getty Images collection enables a deeply engaging experience in virtual reality, a technology poised to transform the way individuals interact with the visual world.”

360° View by Getty Images can be experienced today with the Gear VR Innovator Edition for the Samsung Galaxy Note 4 and Galaxy S6 series. The collection will also be available for streaming on the highly anticipated Oculus Rift, due for launch Q1 2016.

Getty Images has been capturing 360-degree imagery since 2012, employing the technology to offer an unrivalled view of the world’s biggest events, including the red carpet at the Oscars, the most recent Summer and Winter Olympic Games and the Cricket World Cup. Each 360 degree image enables viewers to pan their way around a scene in any direction, giving them the experience of being present in that moment. High-resolution technology enables viewers to zoom in on the action and time-lapse sequences take them through an event as it happened.

“With Getty Images’ long standing passion and expertise for visual communications combined with Oculus’ market-leading technology, the experiences users are able to enjoy through the Oculus platform will continue to evolve and grow in a dynamic way.  We look forward to what will be a long and fulfilling partnership to evolve the way we put the power of images into people’s hands,” added Pinney.

This partnership follows other major steps Getty Images has taken into the consumer space. In 2014, Getty Images shook up the industry by  making its imagery available for easy sharing for non-commercial use at no cost through its embed tool, and launched its iOS app Stream, a free mobile application allowing consumers across the globe to view and share the world’s best photography. Most recently, Getty Images announced the launch of a bold new consumer website experience, which enables seamless sharing of content and features hand-curated ‘best of’ galleries.