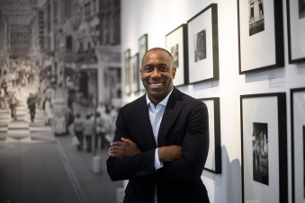 Getty Images, a world leader in visual communication, today announces the appointment of Leander LeSure as Chief Human Resources Officer (CHRO). In his new role, Leander will further develop Getty Images’ innovative culture and values, ensuring that the company has a world-class human resources strategy to support the business through an exciting period of growth and evolution.

With over 20 years of experience, Leander is an expert in his field. He comes to Getty Images from Western Union, where in his most recent role as Global Head of Human Resources, he implemented a robust talent management strategy, employee engagement programmes and an innovative HR operating model across the company.

Currently based in London, but relocating to New York and reporting to Getty Images’ CEO Dawn Airey, Leander will sit on the company’s executive team, serving as a strategic partner to the CEO, as well as leading all aspects of HR to support the company’s growth and success.

Dawn Airey, CEO of Getty Images, said: “Leander is an accomplished leader with deep experience in transformation, leadership and accountability in global companies. Throughout his career he has demonstrated a razor-sharp understanding of the importance of aligning human resources with a company’s strategic vision. Leander will be a business partner for Getty Images’ most important asset – its staff. I am delighted Leander is joining Getty Images as our Chief Human Resources Officer and look forward to his contributions to this next phase of the success story that is Getty Images.”

Leander LeSure, Chief Human Resources Officer, said: “Getty Images is known globally for the incredible imagery it creates and distributes – which is a clear testament to a talented, strong and driven team behind it. My personal approach is one that ensures people are at the very heart of business strategy and I am immensely excited to join the team. Getty Images is going through an exciting time of evolution and growth and I look forward to being part of this journey.”

Prior to his time at Western Union, Leander served as Global Head of Human Resources at American Express, where he served for 10 years, as well as held senior positions at Marsh Inc. and PricewaterhouseCoopers. Early on in his career, he served in the US Navy.

Leander joins Getty Images on 12 December, based in New York.