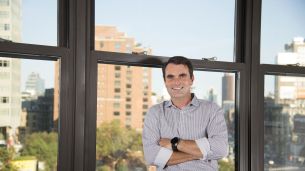 Following the launch of Getty Images’ consumer website experience earlier this month, the world leader in visual communication today announces the appointment of Steve Grimes to the newly created role of Managing Editor & Senior Vice President of Consumer Media. Steve will have editorial oversight of Getty Images’ new consumer platform, and will be responsible for delivering a world-class user experience to the 97 per cent of visitors to gettyimages.com that come to admire, share and engage with the world’s best imagery. Steve will begin his new role at Getty Images on 8 September, 2016.

Based in New York and reporting to Getty Images CEO Dawn Airey, Steve’s appointment marks another significant step in the company’s strategy to extend its core B2B licensing business and establish new revenue streams in the consumer market.

In this new role, which sits on the company’s Executive Committee, Steve will drive the creation of a new consumer-based business stream for Getty images and its 200,000 contributors. With over 200 million award-winning images and Getty Images’ 21 years of industry-leadership and visual communications expertise at his disposal, Steve will create a new media destination serving up the latest in global news, sport and entertainment, alongside iconic historical content and the very best in creative conceptual imagery.

Dawn Airey, CEO of Getty Images said: “As we embrace the potential of the consumer market, the sky is the limit. Our photographers cover over 130,000 high profile news, sport and entertainment events each year, and with Steve at the helm of our consumer experience, we will curate and package this content in engaging and creative ways and grow our already significant consumer following. It’s an extremely exciting and entrepreneurial time for the company and I am thrilled that Steve is joining our team and contributing his ideas, strategic thinking and wealth of experience to our consumer journey.”

Steve Grimes, Managing Editor & SVP of Consumer Media at Getty Images said: “Leveraging content to tell great stories and engage consumers is at the heart of what I love to do, and I can’t wait to delve into Getty Images’ immense collection to bring these stories to life for everyone, whatever their interests and wherever they may be in the world. Getty Images has the world’s best imagery, a renowned brand and strong existing consumer following, providing a strong foundation for this exciting new business channel. Watch this space.”

Steve comes to Getty Images from Viacom’s Comedy Central, where, in his most recent role as SVP of Multiplatform Programming & Strategy, he led all aspects of non-linear programming, spanning apps, website, social media and video on demand for all Comedy Central shows, including The Daily Show, Key & Peele and Inside Amy Schumer. During his time there, Steve was twice awarded an Emmy, for Special Programming for The Daily Show and Best Interactive Event for Night of Too Many Stars.

In addition to his entertainment expertise, Steve brings to Getty Images his extensive experience in the sports industry, having served as Chief Digital Officer of The Topps Company, VP of Interactive at the National Basketball Association, General Manager and Creative Director at RealNetworks and Creative Director at Starwave/Infoseek/Walt Disney Internet Group. Beginning his career as a designer and copywriter, Steve also has advertising agency experience having worked at Stratton Advertising in London, UK and Bayer Bess Vanderwarker/FCB in Chicago, US where he was VP of Interactive and led the agency’s expansion into interactive advertising.

This hire follows a series of recent new appointments to Getty Images’ Executive Committee as the company drives forward its strategy for growth. In June 2016, the company announced a new Innovation Group spearheaded by Steve Heck, Chief Innovation Officer, and in July 2016, Andrew Hamilton joined Getty Images in the new role of SVP of Data & Insights. These appointments follow the launch of the Getty Images Virtual Reality Group, a new business dedicated to the creation and global distribution of virtual reality content.