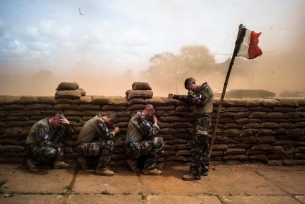 2015 marks a milestone year for Getty Images at the prestigious photojournalism festival, with a record five exhibitions, showcasing the array of ground-breaking and compelling photojournalism the company is renowned for. The esteemed work being exhibited includes:

Alejandro Cegarra, Living With The Legacy Of Hugo Chavez

Getty Images photojournalists have also received several award nominations, with the company also awarding $50,000 in editorial grants on the ground to its 2015 Grants for Editorial Photography recipients.

Speaking on Getty Images’ success, Co-founder and CEO Jonathan Klein said: “Imagery is the language of our time and photojournalism has an unrivalled power to educate, inspire and spur action. We are incredibly proud of the esteemed work our photojournalists capture each and every day and are thrilled this has been recognized by the festival. At Getty Images, we are deeply committed to excellence in photojournalism and Visa pour l’Image is the ideal setting to celebrate this.”

Getty Images Reportage photojournalist Daniel Berehulak, who was recently awarded the Pulitzer Prize, has been nominated in both the Visa d’Or News and Feature categories for his work commissioned by The New York Times. The award-winning Australian photojournalist has been recognised in the Visa d’Or Feature category for his universally-acclaimed body of work covering the Ebola epidemic. Daniel spent 14 weeks in rural and urban areas of West Africa and his imagery documents the difficult, heart-breaking work carried out by aid workers and local communities. He also captured powerful images of Ebola survivors and their families. His nomination in the Visa d’Or News division is a result of his recent work, documenting the earthquake in Nepal, also commissioned by The New York Times. You can view his award-winning portfolios here.

For the fourth time in five years, a Getty Images Reportage photojournalist has been awarded the prestigious Ville de Perpignan Remi Ochlik Award – in 2015, Edouard Elias receives the award for his work titled ‘French Foreign Legion in the Central Africa Republic. The compelling body of work documents Operation Sangaris - the French intervention in the Central African Republic in August, 2014. The work captures the troops in the oppressive atmosphere, working and waiting in a hostile tropical environment.

Getty Images Vice President, Photo Assignments, Editorial Partnerships and Development, Aidan Sullivan says: “Getty Images Reportage is renowned for defining, seminal photojournalism and this year is no exception. With Daniel’s double nomination for the Visa d’Or, as well as Edouard’s Remi Ochlik award win, we could not be more proud of our team.”

This year Getty Images is celebrating the 11-year anniversary of its grants programme, which has awarded more than $1.3 million to date. The Grants for Editorial Photography programme showcases and supports powerful and inspiring photojournalism projects.  Judged by industry greats including Jon Jones, Director of Photography for The Sunday Times Magazine and Romain Lacroix, Director of Photography for Paris Match, five grants of US$10,000 will be awarded to photojournalists pursuing projects of personal and journalistic significance.

In addition to the exhibitions, Getty Images will have a strong presence at the festival through several screenings of their photographers’ work, and daily portfolio review sessions conducted by the Getty Images team in the Palais des Congres.

This is the eighth year Getty Images has sponsored the prestigious festival, demonstrating its continued commitment to the photojournalism industry and emerging talent.